Let’s pickle it! Russian most popular way to preserve food for winter 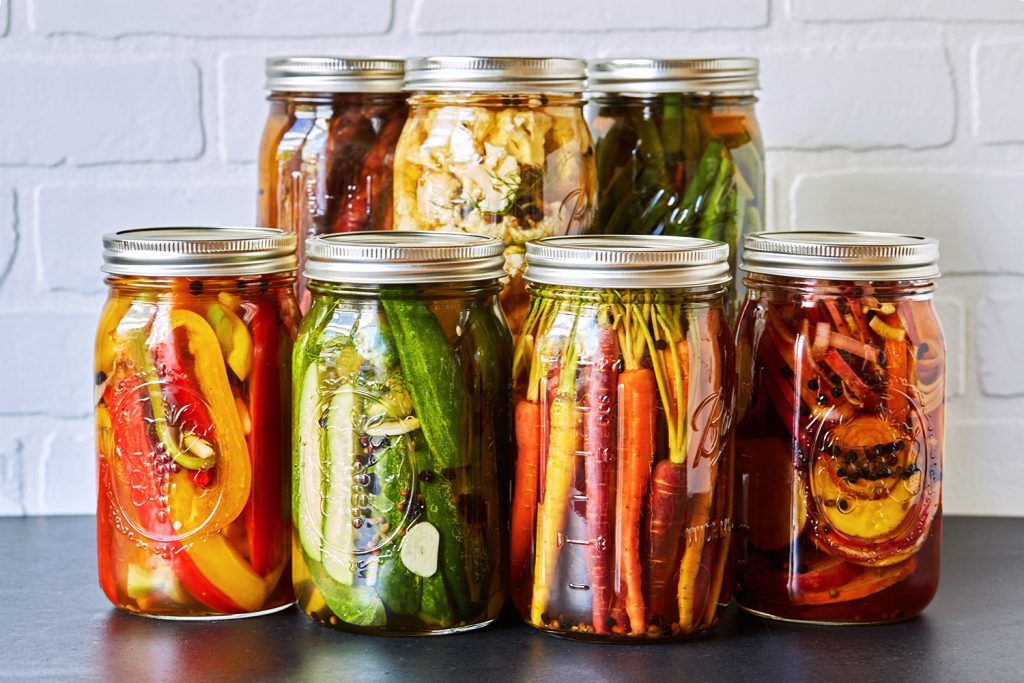 Have you ever tried pickled tomatoes? What about pickled garlic? And pickled apples? If these foods sound unusual to you, there are high chances you are not Russian.

Strolling through Sadovaya market in Saint Petersburg, I was struck by the amount of pickled food they sell. In particular, there is a specific spot where Russian sellers (usually women) are arranged in rows, tending their arms to passbyers offering pickled food of all sorts. I once grabbed a small long green vegetable from their hands, and, encouraged by their persuasive and loud invitations (попробуй девушка, это вкуyyснооо! – Take it, young lady, it is very taaastyy!) I tasted it. I had no idea what I was chewing but I have to admit it was, indeed, tasty!

Spending some more time in Russia and tasting more pickled veggies, I have started to appreciate their savory and garlicy flavor, so much that I now often use them in my recipes or simply chew on them as a snack. But why does Russia have such a great variety of pickled food?

The reason lies in Russian freezing and never ending winter, that prevent people from having certain fruits and vegetables throughout the year. Canning and pickling seemed to be a logical solution to this problem, starting to be used as preservation methods a long time ago. The pickling technique is coherent to an ancient Russian saying, that goes:

Fix your cart in winter, and sled in summer.

Meaning: stock up for the winter when the weather allows you to!

Moreover, the fermentation process allows food to be kept for a long time, saving all of its nutrients. In fact, nowadays many nutritionists have agreed that probiotic food improves digestion and boosts our immune system, which made pickled food become popular and even fashionable.

So, without further ado, let’s get into Russia’s top list of pickled food. 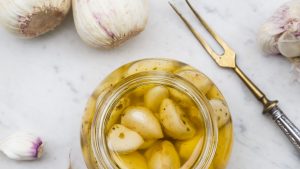 Despite its pungent odour and taste, garlic is known for being one of the healthiest vegetable in nature. Even though many appreciate its strong flavor, most of us tend to avoid it before dates and gatherings, to prevent the well-known and unpleasant garlicy breath.

However, marinated garlic is definitely not as strong: using it in your recipes, or even putting some on a piece of bread, you will notice the flavor is still there, but not to the point of mouth contamination. If you want to try pickled garlic but you don’t live in Russia and you are having a hard time finding it, just follow this simple recipe to prepare your own:

In a hot sterilized jar put some pepper and mustard seeds, a couple of bay leaves and the peeled garlic cloves. Add the hot marinade (for 0.5 liter of water – 3 tablespoons of vinegar,1 tablespoon of sugar, 1 tablespoon of salt), close the lid, turn the jar upside down and leave it in a dry and dark place for at least a week. 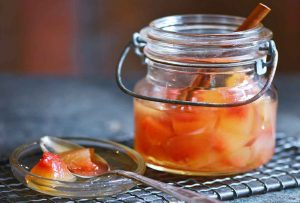 You read it right. Although it is not that common to find pickled watermelon in Russian big cities’ restaurants, this dish remains quite popular in the countryside (derevnya), where babushkas keep preparing tons of jars during the summer time. Watermelon is a summer fruit, we all know it. But what if you find yourself craving it while in the middle of winter, let alone in Russia? We have the answer for you. Follow our recipe!

In a large bowl stir together a tablespoon of salt, sugar, pickling spices, cayenne, vinegar, garlic, celery, dill and 8 cups of water until salt and sugar dissolve. Submerge the watermelon wedges. Cover with plastic wrap and refrigerate for at least 1 week before consuming it. 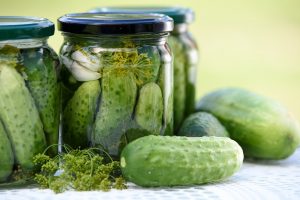 We are sure you are aware of Russian boundless love for pickled cucumbers, which in movies are usually being crunched on after dropping down a vodka shot (their savory taste seems to go very well with alcohol).

Cucumbers can be pickled in two ways: with vinegar (marinated), or just with salt and water (some Russian daredevil even sips on the pickle marinade after drinking, but we do not recommend it).

If you want to make pickled cucumbers yourself, follow this recipe:

Take 1 kg of cucumbers (preferably not bigger than 10 cm) and soak them in cold water for 2 hours. Put some bay leaves, blackcurrant leaves, 4 cloves of garlic, some dill and cherries on the bottom of a jar. Add the cucumbers, 1 tablespoon of salt, cold boiled water and then close the lid. Shake the jar in order to dissolve the salt and let the jar rest in a cool place for at least 2 weeks. 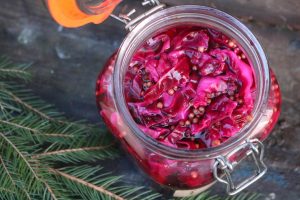 Sauerkraut is a very popular fermented food not only in Russia, but also elsewhere in the world. It went down to history for helping sailors prevent the scurvy during long ship journeys thanks to its high vitamin C content. You can either eat the sauerkraut in salads, or add it to various recipes to your taste (for example in solyanka or shchi soups). To prepare the sauerkraut:

chop one cabbage head and mix it with one grate carrot, then add one tablespoon of salt and half a cup of cranberries. Put everything into a jar and let it ferment for 3-4 days (the mixture will ferment at a temperature of 20-21 C). Keep the sauerkraut in the fridge. 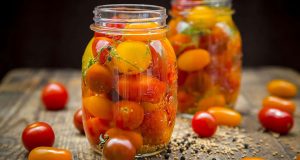 Among all of the vegetables you could pickle, I have somehow never thought of tomatoes. In Russia, however, pickled tomatoes are a stable food and you can find them in any supermarket. As for the pickled cucumbers, pickled tomatoes go perfectly with alcoholic beverages because of their savory taste. If you are curious to try them, follow this recipe:

Take as many tomatoes as you could fit in a jar (we’d go for medium sized). With the help of a skewer, poke holes in the top of them. In a pan, heat one cup of white vinegar and a cup of water with one tablespoon of salt and sugar. Put the zest of half a lemon, a teaspoon of rosemary, some cloves of garlic and some mustard seeds to a jar, then add the tomatoes as well. Pour the marinade over the ingredients in the jar, let it cool and refrigerate (pickled tomatoes usually last up to 2 weeks). 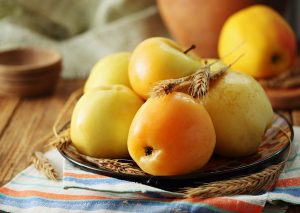 With pickled apples, we realize that the Russian pickling-mania really has no limits. If you think about it though, people had to survive Russian winter without experiencing vitamin deficiencies, hence the need also for pickled fruit as well as vegetables.

Rumor has it that even Pushkin himself could not imagine his family dinners without pickled apples. Russians usually use a specific kind of apple for this recipe, called Antonovka, but you can use any apple you want, as long as it is slightly sour and preferably crunchy.

Put some blackcurrant and cherry leaves in a jar, then add the apples and pour the cold brine (water, vinegar, salt and sugar, the same doses you use for the pickled cucumbers). Cover tightly. Leave at room temperature for 5 to 6 days (you will notice fermentation activity the next day), then transfer to the fridge and let it ferment for 30 days more (the more they ferment, the more their flavor will get better). 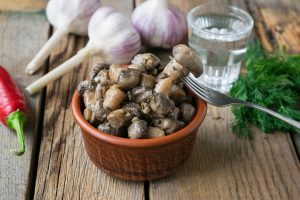 In Russia, mushroom picking is a rather popular activity, especially in autumn. Pickling mushrooms came as a solution not to let these freshly picked fragrant gifts of the earth rot, as well as to allow their consumption all year long. One of the most popular kinds of pickled mushrooms are small chanterelles. Let’s learn how to prepare them!

Boil the chanterelles in a pan until they sink to the bottom (3 minutes should be enough) then move them elsewhere. Add salt, pepper and sugar to the remaining water and bring it to the boil. Add the mushrooms, pour 1 tbs of vinegar and boil for 5 minutes. Pour the mushrooms with their water in jars and store them in a cool place for at least one month before eating them.

If you are curious to taste these foods but you are not in Russia at the moment, try and make them yourself! We are sure you won’t be disappointed. Don’t forget to let us know which one is your favourite by commenting below!

2 responses to “Let’s pickle it! Russian most popular way to preserve food for winter”