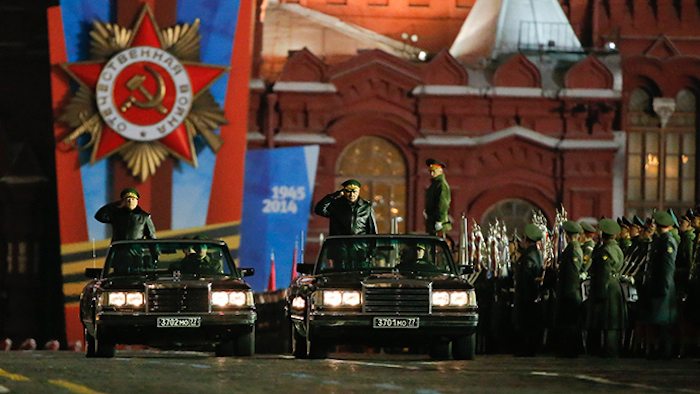 The May 9th, or the Victory Day marks the capitulation of Nazi in Germany and the end of the Second World War. It is the same celebration that the armistice of the May 8 (May 8, 1945, signing of the act of surrender), but is celebrated on May 9th because of the time zone difference between Berlin and Moscow (the Nazi capitulation took place during the night in Berlin).

On the occasion of this public holiday, many events are organized in Moscow and one of the most signify and grandiose is the parade. Russian people are really proud of this parade ! It is really impressive, because if you have the chance to see it, there are all the military schools (naval, space academies, defense, air force !) but also the army, tanks, aircrafts !

First to Poklonnaya Hill, Victory Park will be a horse show “Russian Traditions” and a concert by the Symphony Orchestra of the Mariinsky Theatre, with pianist Denis Matsuev. Other artists are also scheduled in the evening.

If you want to dance, go to the ball of victory in the Garden “Hermitage” which on this occasion will recreate the atmosphere of victory in May 1945. Outdoor Kitchen and fanfare, men dressed in the fashion 40s and students in uniform: in old school fashion!

The Gorky park celebrates Victory Day (12:00 to 7:00 p.m.) in a more artistic way with the “Circle of Memory” where street artists present works on their visions of the war. Inside the circle is created memory space, where visitors will be able to attach photos of their loved ones and sign their names. Several concerts will be organized!

If you walk in the town center,  go through Kamergerskoy pereulok that will exhibit pictures of life at the front. Students of art universities will read poems about war, documentaries, songs about war will also be present! There’s also established a military tent, where visitors can learn how were the communication systems during the war years. Time: 14:00-20:00.

Action in memory of “Moscow remembers”

May 9 on Tverskaya Boulevard Action “Moscow remembers” to gather all those who cherish the memory of their loved ones who heroically fought for our peaceful life during the Great Patriotic War. Descendants of winners, their children and grandchildren will be on the boulevard with pictures of their loved ones and family heirlooms – medals and letters from the front. Along the boulevard will be set podiums with microphones, where everyone will be able to tell the story of their relatives who took part in the war.

Victory Day in the park “Sokolniki”

Museum of military equipment in the open air, bands, musical performances will be featured. In the main flower beds will be organized flashmob “Star Victory”, where everyone can light a candle in honor of veterans. Time: 13:00-22:00.

Here, viewers will see the choreography “Eternal Flame” and the performance of the Moscow Children’s Music Hall “Wonderland” , the artists of the theater ” New Opera ” and the male chamber choir running VM Rybin and many other popular artists and collectives . Also in the program – numbers from musicals performed by the Moscow theater Artem Makovsky , a group of “Mr. X” , winners of international competitions J. Cech and group ” Побратимы ” and participants of the festival ” Дикая мята ” : groups as Клейзмастер or Мейделих .

Finally, at 22h, over 70 fireworks will be drawn across Moscow: if you want some advice, the best place to see is to Sparrow Hills (Воробьёвы горы)!