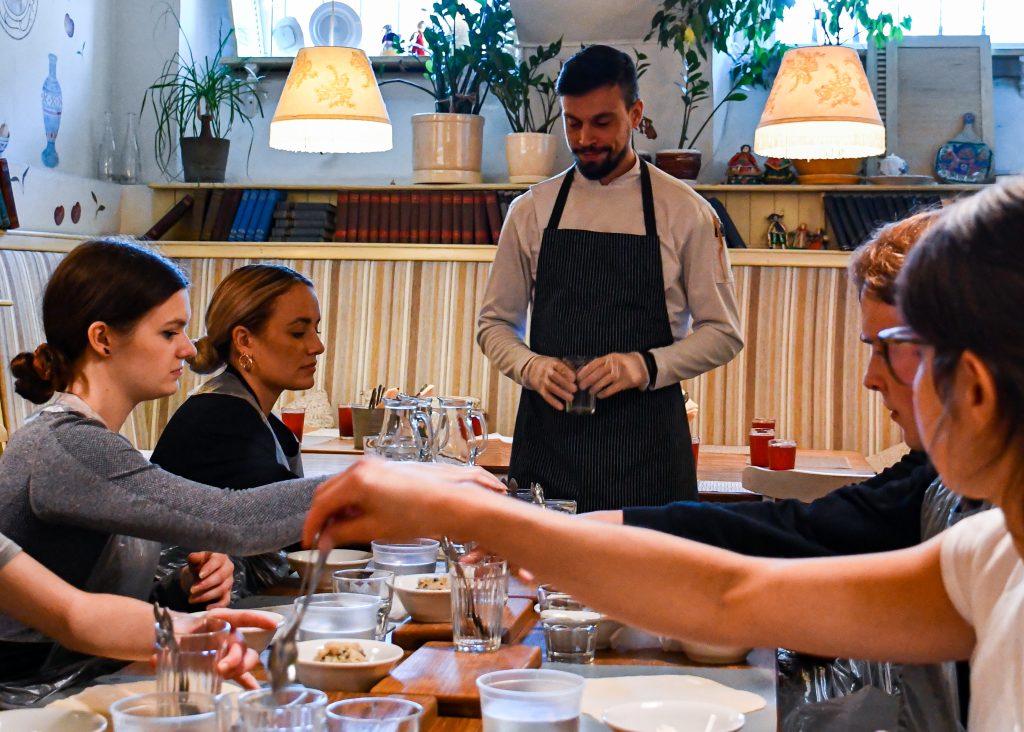 At “Liden & Denz” you can not only learn languages, but you also have the opportunity to participate in a wide variety of activities that will help you to get to know Russian culture more closely. The activities are organised by the school itself. Some of them have a cost (quite inexpensive, by the way) and some are even free of charge. These range from a Matrioshka painting workshop, to excursions around the city, to learning how to cook some traditional Russian dishes (just to mention some of the activities). In this article I’ll tell you a bit about our “culinary Friday”, and how we learned to cook the famous Pelmeni (пельмени) and Vareniki (варéники) that the locals tell you so much about when you ask them to recommend a Russian dish.

It’s Friday, Russian lessons are over, the day is sunny with pleasant temperatures, and the sweet smell of the weekend is all around the Liden & Denz campus in Saint Petersburg. After bidding a warm farewell to our colleague and writer Leila, who had her last day last Friday, and toasting with a glass of champagne, we were ready to start our walk to the restaurant where they would have everything ready to fill our hands with flour. But before we go: a photo of the cooking team! 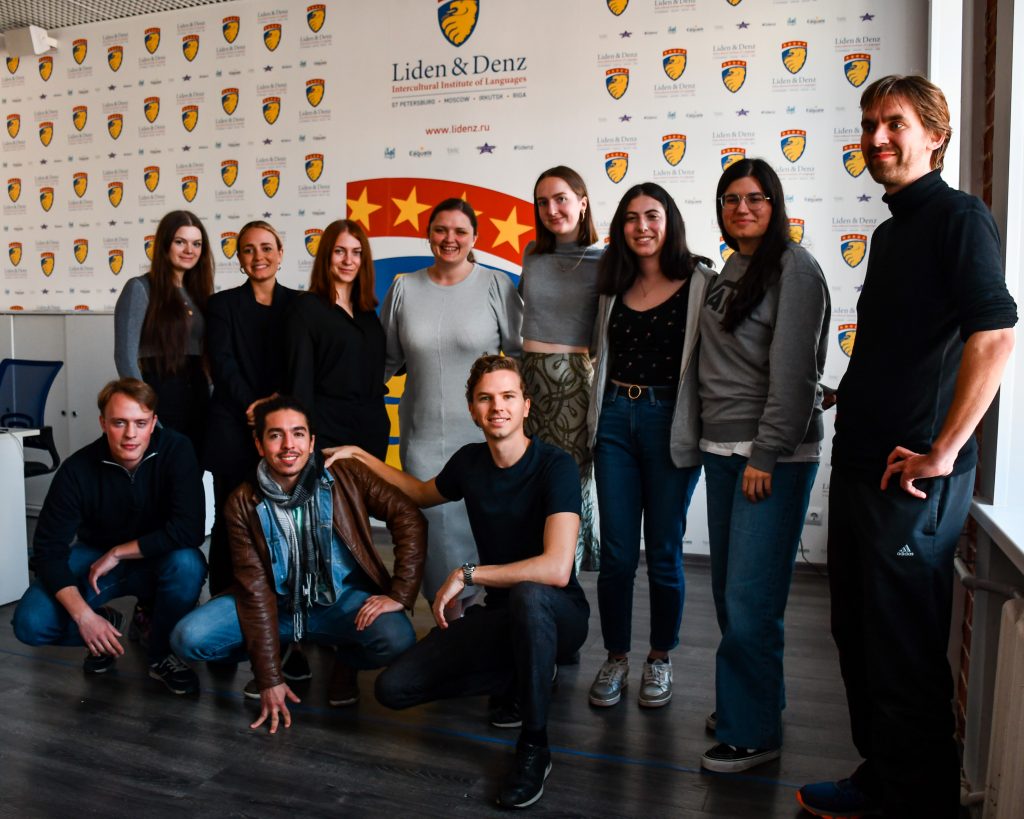 The food must be earned, and it won’t come to you, so you have to go and get it! Departure point: Liden & Denz St. Petersburg; Destination: Yat’ restaurant (Ять). After a nice walk of only 30 minutes, crossing several city bridges and even a beautiful park, we arrived at our destination, which calls itself “a legendary homemade-style Russian cuisine restaurant”.

This restaurant has a privileged location, since, if you take a look at the map, you will notice that it is located between four iconic sites of the city, none other than the Hermitage Museum, the Church of the Saviour on Spilled Blood, the National Pushkin Museum and the St. Petersburg State Academic Chapel. And if that wasn’t enough, it’s also right next to the River Moika (Мо́йка), which adds a touch of tranquillity and freshness to the atmosphere. Inside, the décor is quite cosy and original, which quickly makes you feel at home.

Let’s get to work!

When we arrived, the “worktable” was already set up and everything looked great. After a brief introduction by the restaurant’s cooks (the official ones, of course), we were each given a rectangular wooden plate with the dough already rolled out, a bowl with water, one with flour, one with ground meat and a last one with a mixture of potato, onion, and mushrooms. It is worth mentioning that, personally, I would have really liked to make the dough, the mashed potato mixture, and the meat mixture from scratch; however, I understand that this might have taken too much time, so it will be an experience for another time ?

Before we started shaping our own creations, one of the cooks explained to us how to form the Pelmeni and Vareniki. The difference between the two lies in two simple details: content and shape. Contrary to the Pelmeni, which are made with meat and are attributed a somewhat rounded shape, the Vareniki contain only vegetables and have a more elongated appearance. However, the ‘creative process’ is almost identical, except for a small step to distinguish the final product when cooking, as you will see below.

Et voilà! Now it’s just a matter of putting them in boiling water (with a little salt) and waiting for them to be al dente. But be careful: Pelmeni and Vareniki must be cooked separately, as the cooking time varies and because one must always consider and respect the dietary preferences of each person (even from the moment of boiling the food). 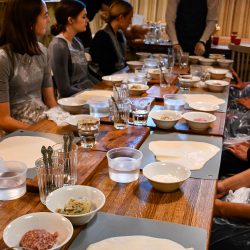 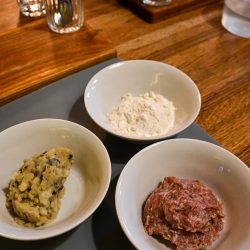 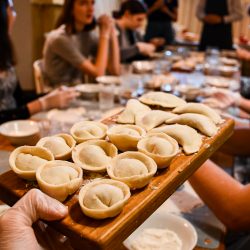 After everyone had finished forming their Pelmenis and Varenikis, the cooks did us the favour of boiling them. In the meantime, we moved to the main table, where in a few minutes we would taste our delicious creations. But, to start with, we could not miss a shot of vodka, either the classic one or one of the homemade creations with different flavours. 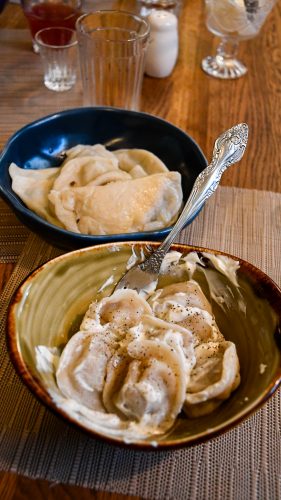 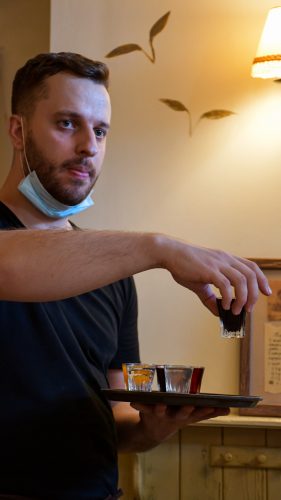 The food was served in about 20 minutes. Normally a little cream (сметана) is added while they are still hot. And of course, as always, the dish was gone much faster than it took to prepare it.

It really was absolutely delicious, and I would definitely make this recipe again. The pleasant atmosphere of the restaurant certainly contributed to the experience of cooking this traditional Russian dish, as we left the restaurant quite satisfied and with a smile on our faces. And I am sure that, if you decide to prepare this dish at home and with friends, the experience will be equally excellent, and everyone will be more than pleased ?!