Idea for the Weekend: Folklore Festival in Ismailovo

For some reason, few visitors to Moscow seem to know about the Ismailovo Kremlin. The word ‘Kremlin’ for most brings to mind the imposing and infamous scarlet walls around the fortress by Red Square. It is a symbol of Moscow, of Russia, of authority and dictatorship, of Tsars and Communist rule, and it is impressive and somewhat formidable. But the Moscow Kremlin is by no means the only one: many other cities have their own (Kazan, Vladimir, Nizhny Novgorod to name but a few) and there is another in Moscow by Ismailovo Park. 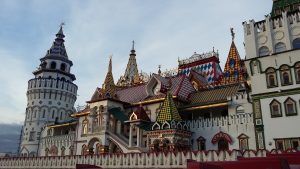 This Kremlin is slightly less fearsome. And by slightly less I mean not at all because it is the Disneyland of fortresses, painted in bright colours and decorated from foundation to wind vane with traditional Russian designs. As well as playing host to a market specialising in second-hand and vintage goods, plus art and souvenirs, the Kremlin at Ismailovo is also a haven for the devotee to Russian folklore and all things “narodnyi”. 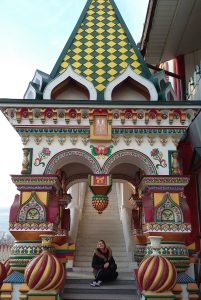 This weekend the Ismailovo will be the backdrop for the Osiyannaya Rus’ (Осиянная Русь) Festival or, to make things simpler, the Illuminate Rus’ Festival. The Festival aims to celebrate handicrafts and traditional music and arts. There will be competitions and markets, selling books and traditional handmade items. The weekend will end with a grand Gala concert and the already cheery Ismailovo will become even brighter and busier. And if all else fails, there are some really good cutouts of Matryoshki dotted around the place: perfect for the ultimate I-love-Russia-and-all-things-Russian profile picture (see below for my mother’s attempt last year)! 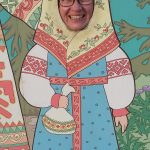 My mother, the ultimate Matryoshka!

The Illuminate Rus’ Festival takes place this weekend (1st – 2nd October 2016) at the Ismailovo Kremlin. Ticket information can be found at http://www.osfest.info and for more info about Ismailovo in general, visit http://www.kremlin-izmailovo.com.