Moscow is the most important city in Russia, not only from the economic and financial point of view, but especially because it is a vast cultural centre, boasting a rich artistic and literary heritage. Moscow was house to many famous writers who made the history of the Russian literature: Mayakovski, Tolstoy, Chekhov, Dostoevsky, just to name a few. Walking around the city, you will notice that most monuments, squares or buildings are named after them.  These spots will be appealing to those who love literature and want to immerse in the atmosphere that contributed to the creation of their favourite Russian novels. Follow me in my quest to find literary footprints in this blog post! 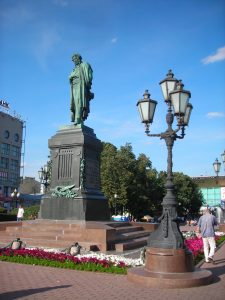 It is essential to start from the square named after the father of the modern Russian language. This large and wonderful square is located in the Tverskoy district, right behind the Tverskaya and Pushinskaya metro stations. The square is majestically dominated by Pushkin’s statue, which represents the author in an elegant and thoughtful stance. It is exciting to know that the monument was unveiled in 1880 during a public speech made by Turgenev and Dostoyevsky, two other Russian writers whose works have been deeply influenced by Pushkin himself. In the 18th century, the members of the Russian high society frequently visited the area of Pushkinskaya Square and Tverskoy Boulevard and Pushkin as well was often there for a promenade. Despite the presence of Pushkin’s statue, the square got its current name only in 1937 and it was formerly known as “Strastnaya Square” because it used to house the Strastnoy Monastery, which was then demolished. During the soviet era, Pushkin became an object of deep admiration and a state symbol and big celebrations were organised for the anniversary of his birth. Nowadays, Pushkinskaya Square is a cultural hub, being surrounded by a concert hall and the Rossiya Theatre (once called “Pushkinsky Cinema Theatre”), which every year hosts the Moscow International Film Festival, and even the Ministry of Culture is not far from it.

The Arbat is the oldest street in Moscow, dating back to the 15th century. It is located in the Arbat District, not far from the Arbatskaya and Smolenskaya metro stations. It is commonly known as a tourist destination, being a pedestrian street where cafés, bars, restaurants and especially catching souvenirs shops spring up everywhere. 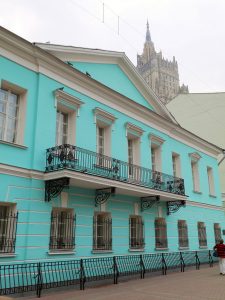 Therefore, today it has become a very popular and crowded place for leisure and commercial purposes, but it is absolutely worth a visit especially because it is an important historic and cultural spot. Once again, we are talking about the long beloved Aleksandr Pushkin. In the blue building n° 53, the poet lived with his wife Natalia Goncharova for a very short period after their marriage in 1831, and, in front of it, you can see a romantic statue dedicated to the couple. Now this apartment is a museum, called “A.S. Pushkin Memorial Apartment”, in which every room displays artefacts and letters that belonged to the poet or to his friends and family, representing different periods of his life. As we can read in one of the exhibited letters, there he was “married and happy”. In the Arbat District, just after a ten-minute walk, if you are interested in the poetry of the 20th century and in the life of émigré poets, you can visit the Dom-Muzey Mariny Tsvetaevoy (Marina Tsvetaeva House Museum), situated in Borisoglebsky pereulok, 6. Here the poetess, born in Moscow, lived during her childhood with her family, from 1914 to 1922. Over the years, the house has become a cultural centre that organises conferences about Tsvetaeva’s life, exhibitions of her autograph letters and collections of her unpublished works. The museum offers different kinds of excursions focusing on her poetry and theatre activity and her relationship with other poets of that time. During summer time, every Sunday at 2 pm, the cultural centre also organises excursions around Moscow, remembering the poet’s verses and the stories and facts about her troubled life.

Dealing once again with 20th-century writers, we are now discovering a place that is deeply linked to Mikhail Bulgakov, the writer and playwright who is famous for his novel The Master and Margarita (Master i Margarita). Located in the Tverskoy district and a short distance from the Patriarshiye Prudy (the Patriarch Ponds, the park where the first chapter of the novel is set) the apartment in Bolshaya Sadovaya Ulitsa n° 10 houses a museum. This was the place where the author used to live with his first wife Tatyana and where some of the most iconic scenes of his masterpiece are located. Therefore, this is an essential visit for the fans of the book, who want to relive some passages of the novel and observe interesting objects from the 1920s, such as typewriters, furniture, books. Even the famous Daniel Radcliffe visited the museum in 2012 and stated that Master i Margarita is his favourite novel. If you are lucky, you will have the opportunity to meet a black cat, Behemoth (named after the talking cat from Bulgakov’s novel), who, just a few days ago, was stolen by a passenger and, after being reported to the police, was finally found. He will make this experience more involving and entertaining, you cannot miss it!

I'm Francesca, an Italian 23-year-old student of Russian at Liden&Denz. I am also an intern as editorial assistant for the school blog, writing about the Russian culture and living in the capital...I hope you will be interested in my articles!