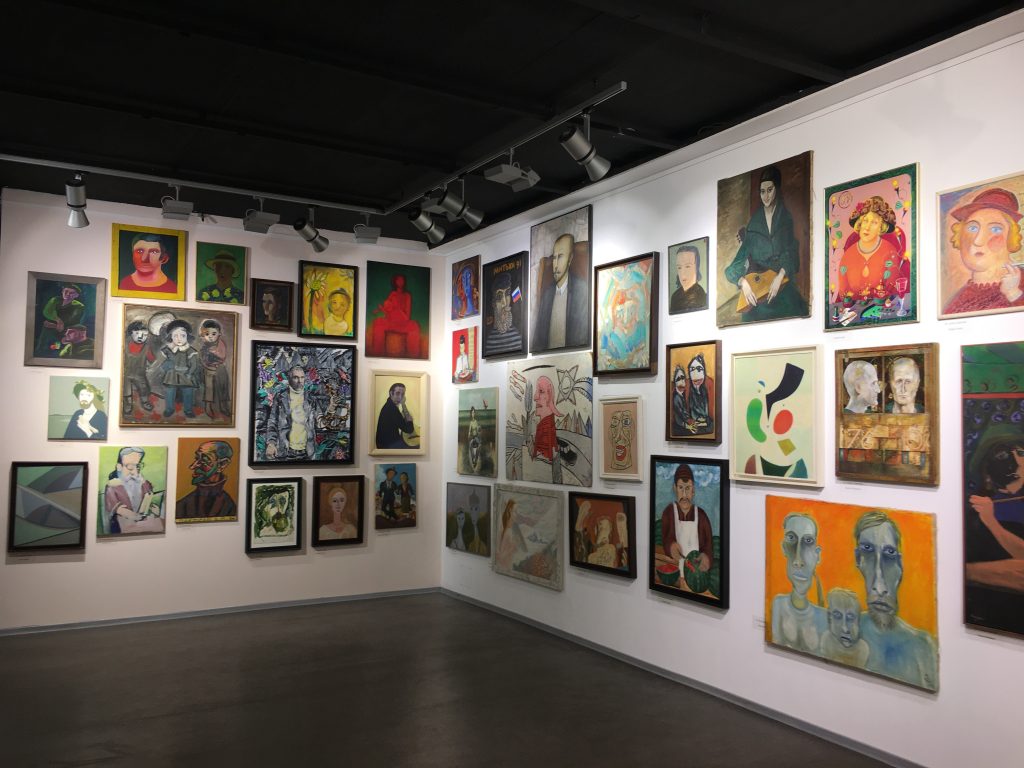 It is well known that St. Petersburg is often referred to as the cultural capital of Russia, and during my short stay here I have certainly witnessed this for myself. Everywhere you go there will be a museum, a cultural centre or a gallery near you. On this occasion, I visited 2 galleries and a cultural centre located very close to “Liden & Denz”, of which I will tell you a little in this article.

First of all, I personally wouldn’t consider myself a person who knows a lot about art. Although I like to visit museums and I am passionate about history, I don’t often go to galleries or discover exhibitions near my city.

But this time in St. Petersburg I was given the opportunity to delve a little deeper into the world of art, a world somewhat unknown to me. This opportunity was given to me not only because art is a present factor in this lively city, but also because one of my fellow Russian language co-students, Claude Spiller, who studied art history in Switzerland, suggested me to visit with him 3 places with close ties to art, in order to write about them and share my experience with you. 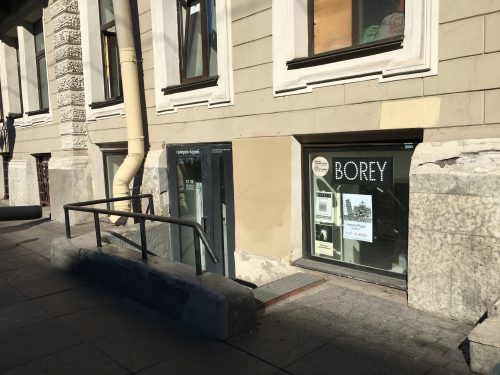 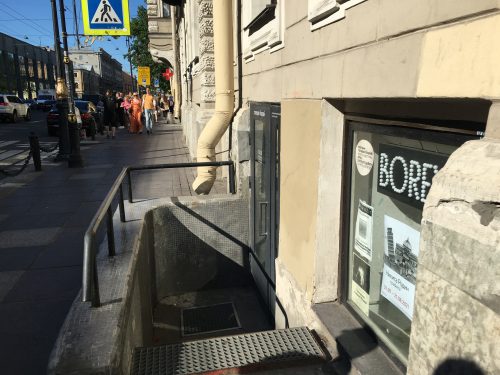 Founded in 1991 as an independent creative organization, Borey aims at building a veritable “House of Culture” and is thus open to any artistic initiative while responding to every genre, trend or relevant tendency in the world of art. The gallery is no further than a 4-minute walk from the school. And although it is located on Liteyniy Ave (Лите́йный проспе́кт), a busy street leading to Nevsky Prospekt (the most famous and active street in St. Petersburg), this little gem might go unnoticed by pedestrians, as the entrance is below ground level, and if you don’t look closely, you might not see it very easily. In fact, I honestly did not see the place before I decided to go there, although I had walked past it for at least 5 times.

The displayed art in Borey lasts for a period of three weeks (starting in the last day of every month). After the three weeks have finished, it takes one week to change the entire exhibition. Then the process repeats itself. This means that visitors can rejoice in the knowledge that at the beginning of each month they will be able to enjoy a new, exciting and varied exhibition.

An interesting detail about the place is that, in the first exhibition room, there is a little door leading to a cosy and very welcoming hidden café, which was full of plants and alternative decoration. An amusing fact is that they have a “home-made robot-coffee machine”, which receives voice commands from the barista and prepares your coffee. That was a peculiarity that I definitely did not expect to encounter at an art gallery ?

There is no entrance fee to the gallery, but a tip is always welcome. Although in Russian it’s called a “Gallery” (Галерея), it’s more of an art centre since there were paintings and graphics from many different artists and various contrasting styles. The first exhibition we saw after entering was from an artist called Nikita Rodin (Никита Родин). His exhibits were black-and-white graphs, drawn in pen and ink. I found the theme of his graphics extremely interesting, as each painting represented a true historical event, but the artist saturated them with details from his own imagination that were not ad-hoc to how the events took place.

On the other side of the gallery there is a small passageway that leads to four other rooms, where more paintings and graphics by various artists were to be found. There was both abstract and figurative art on display. Two of the pieces I personally liked the most were some roses drawn by Ekaterina Kamigunova (Екатерина Камигунова). In one painting the roses are shown wrapped up in cellophane and in the other they’re shrouded in a grey smokescreen. It is said that art doesn’t have to be beautiful, it has to make you feel something. Well, in this case I think the mix between these floral paintings fulfilled both requirements.

When we were about to leave the place, I spotted something familiar. A painting from Artist Buston Sharipov (Бустон Шарипов), called “Pre-Columbian Civilization” (доколумбовская цивилисация) which portrayed a person, probably from the Mayan culture. As a Mexican, seeing this painting so far from my home country gave me a heart-warming feeling. 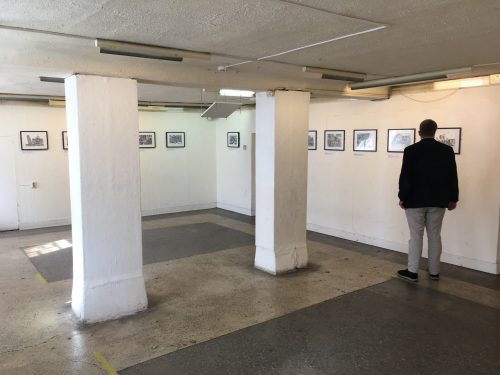 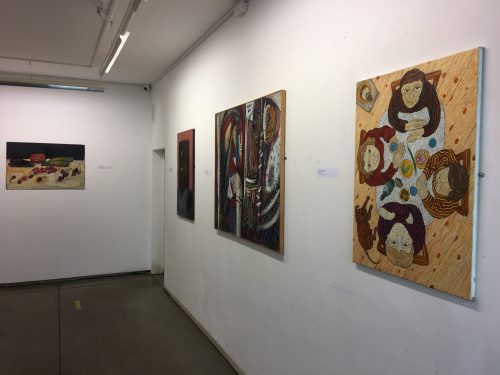 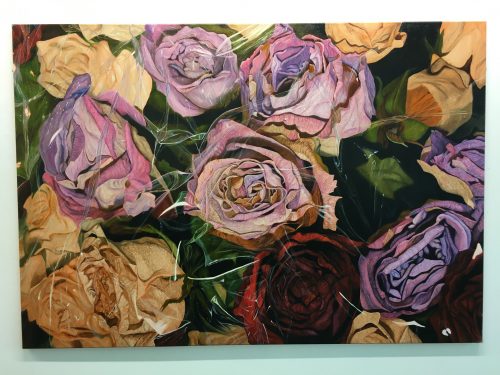 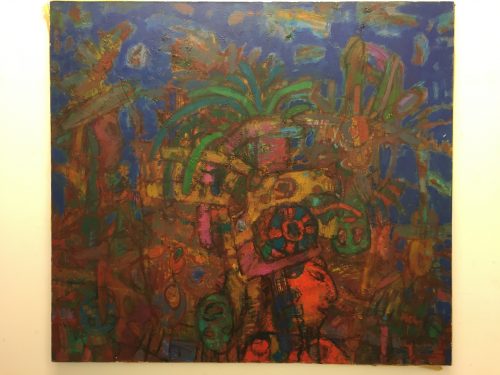 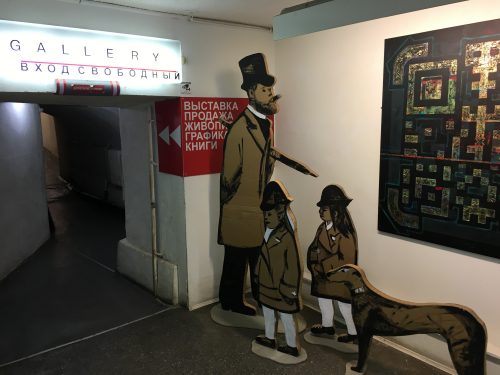 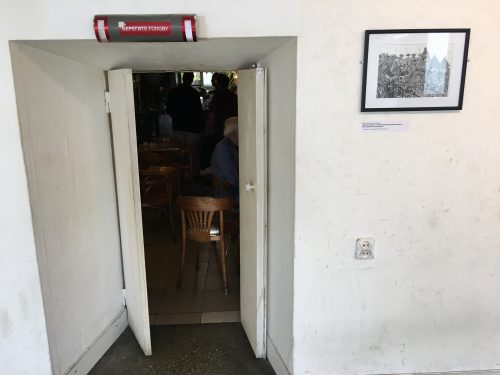 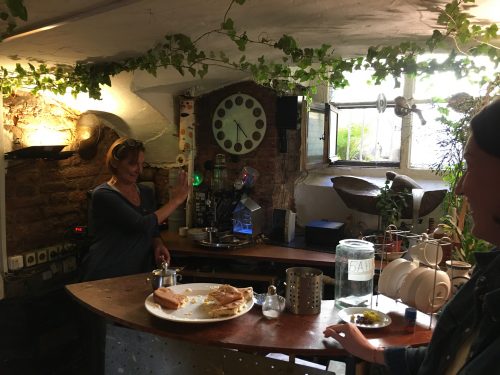 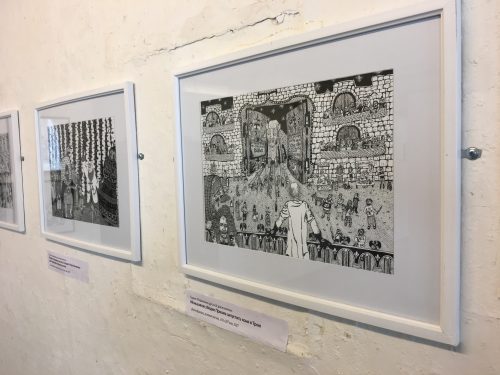 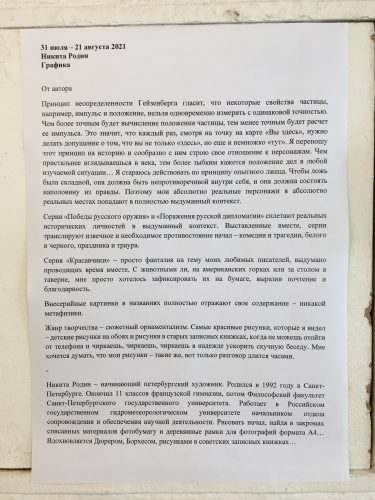 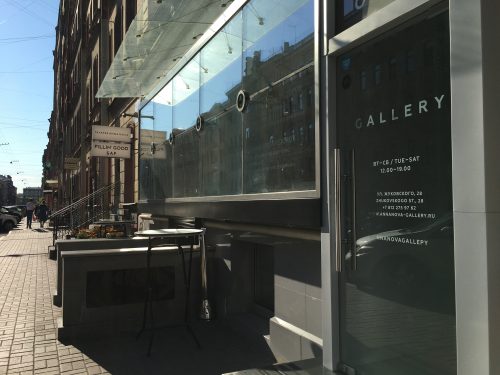 Founded by Anna Barinova in 2005, it is considered one of Russia’s leading galleries. By producing research-based projects and large-scale installations, the gallery actively supports original and innovative interdisciplinary art practices. The gallery has expanded its activities in recent years and now aims to discover and promote young artists working with the pressing cultural problems and challenges facing today’s society.

The gallery also plays an educational role by organising lectures, meetings, workshops and film screenings, thus creating a communication platform for and between artists and curators, professionals, collectors and anyone interested in the development of contemporary art. Art consultancy and the selection of works for corporate and private collections are also part of the gallery’s activities.

The entrance fee is 200 roubles, with students paying only half price. When we entered the place, the mediator (Alberta) gave us a very warm welcome and told us a little about the exhibition. The exhibition we were able to see was by the artist Ilya Fedotov-Fedorov, entitled “The Moth and the bat flying to the light”. We were told that the artist works with the topic of the animal and human world, and how these worlds connect with each other. This project revolves around the idea of the acceptance or rejection of someone or something “different”, thus being a theme linked to the question of tolerance and discrimination of transgender people (who influenced the artist in the creation of this work).

Something interesting that could be considered a coincidence (if you believe in coincidences) is that the author filmed part of his work in a zoo in Switzerland, which brought a smile to the faces of us three Swiss who were present in the gallery. What were the odds that 3 swiss guys went to an exhibition in Russia which showed a swiss zoo?

The gallery is very modern, and the exhibition was shown partly through screens or projections. The exhibition was on two floors, but Alberta very kindly offered us to go up to the third floor, which was closed to the public. This floor is used for meetings and to exhibit certain special works by the artists. I thought it was a very nice gesture on her part to show us that floor.

To conclude our visit, we were fortunate enough to see a live performance. It was the same artist we saw through the monitor just as we entered the gallery. I really don’t know what it was, but I was impressed to see that performance; the concentration, the professionalism, the passion… without a doubt the artist managed to transmit something to the spectators, this being a subjective feeling for each one of us. 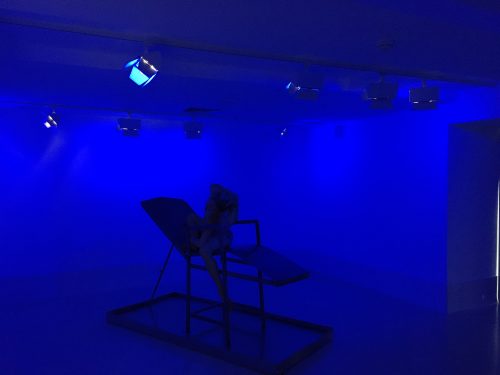 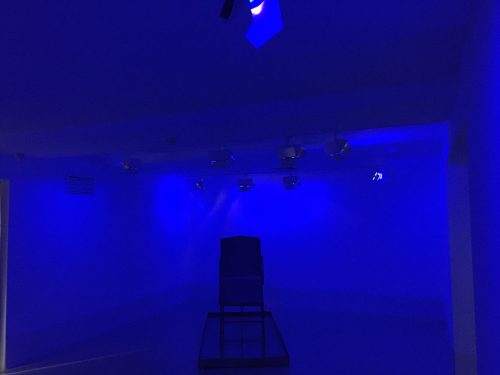 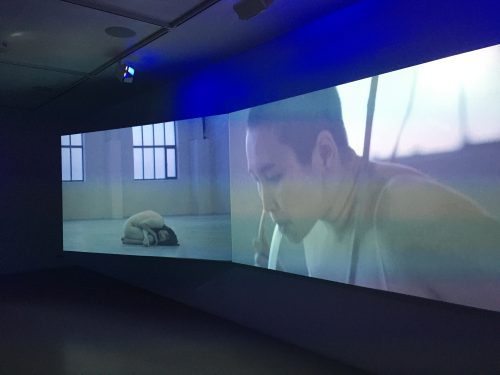 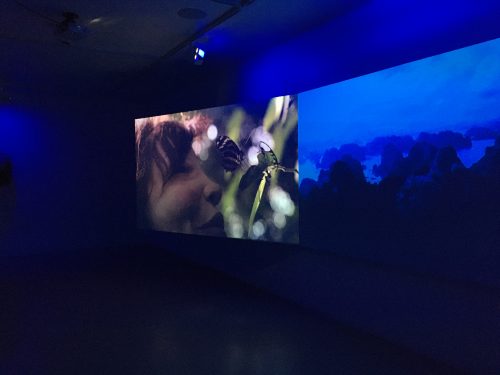 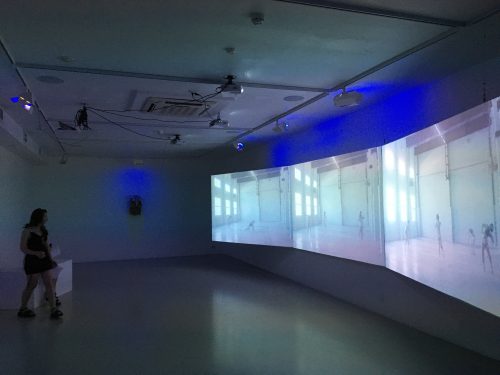 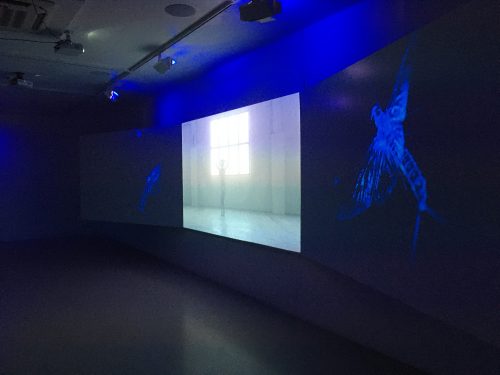 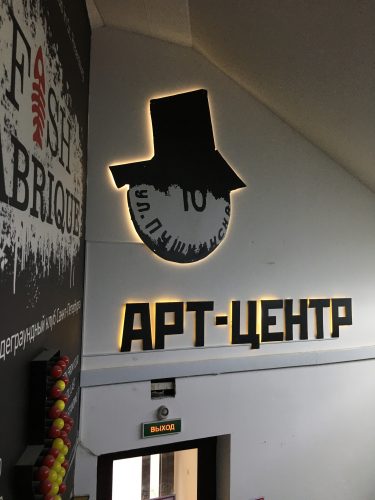 Lastly, we went to Pushkinskaya 10, an art centre that was the furthest away from the school compared to the other two galleries, but which is still quite close. Pushkinskaya-10 is considered to be the only independent and therefore non-governmental self-regulated art commune in the country. In 1989, painters, musicians and other independent artists began to occupy one of the abandoned houses in the region, uniting under the name “Free Culture”, forming a non-commercial NGO, later renamed “Society”. After the period of occupation, the artists’ community was officially recognised and received the name it has today.

For the past 24 years, it has been a centre of creative activity, integrating Russian art into the international cultural process. This art centre regularly presents contemporary Russian art at international exhibitions and/or festivals. The works exhibited in this art centre belong to museum collections in Russia, Europe and the United States.

Visitors to the art centre can discover contemporary art as well as buy various paintings, graphics, books, catalogues, music and, of course, learn about the history of the St. Petersburg underground and alternative scene.

A fee of 300 roubles or 150 roubles if you are a student is required to enter. The site is quite large and consists of 4 buildings, two of which are interconnected. We decided to start our tour by going up the stairs of one of the main buildings. The place breathes art, as everywhere you go you can see artwork or sculptures (yes, even on the staircase). It is recommended to start the tour from the top floor, in order to be able to distribute our energy better, as with tiredness sometimes you don’t want to go all the way up to the 5th floor anymore.

We started in a gallery that exhibited posters critical of our times. I don’t know if it was because it was the first gallery we saw in Pushinskaya 10, but it was the one that made the biggest impact on me. There were posters with quite strong messages, messages that, depending on the context, would not be suitable for publication in every medium, but that would surely be an eye-opener for many.

In the second gallery, entitled “All eyes are on us”, we saw almost exclusively portraits, which is one of the most popular genres in art, but also one of the most difficult. From there we moved on to a gallery that showed us the importance of “Paper” as a fundamental material in the history of art. As you search for other galleries, you come across closed or half-open doors, which are the ateliers where artists are working on their projects.

To conclude our visit, we came across a room dedicated to Rock and Roll. There we met Vladimir Rekshan, the artist who was exhibiting all sorts of cool stuff related to this musical genre. He told us a bit about his life as a rocker during the Soviet era, how he had to build his own first electric guitars, the involuntary distancing of Soviet rock from the rest of the world, the underground scenes for organising gigs… it was definitely a trip back in time, accompanied by that whole room of evidence. It was very entertaining to talk to him for a while and imagine all the crazy things he experienced in his youth. So, if you ever get to Pushkinskaya 10 and run into Vladimir Rekshan, I’m sure he’ll be happy to share his stories to keep the legacy of Soviet rock alive. 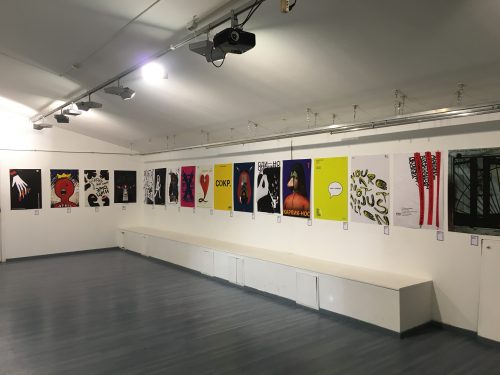 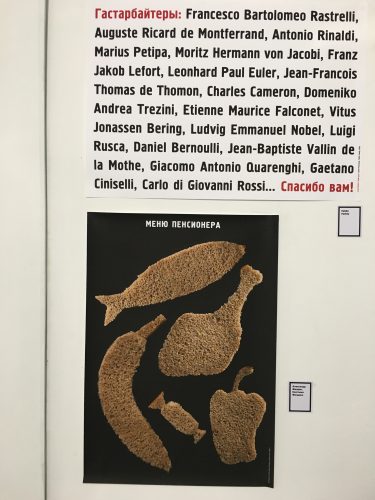 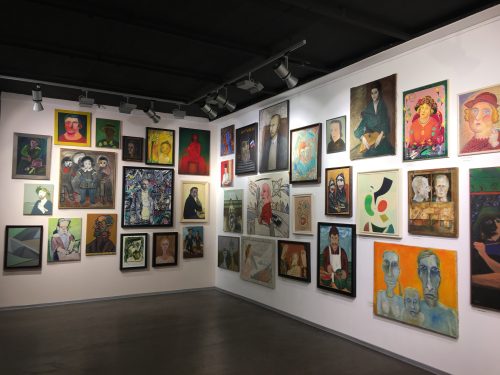 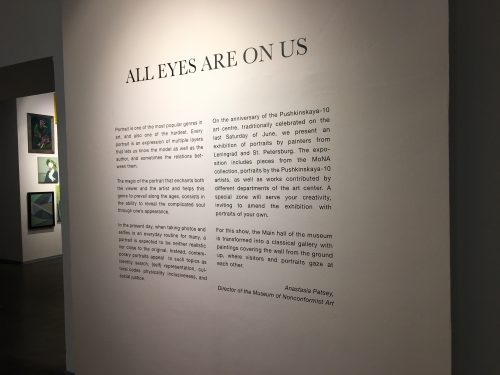 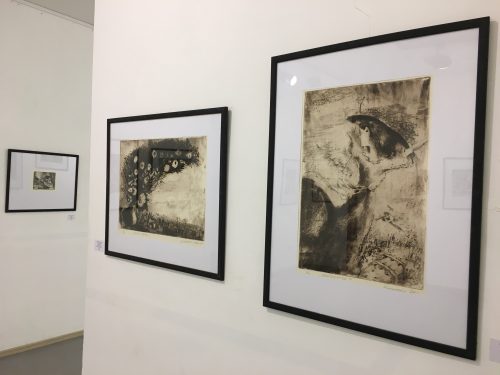 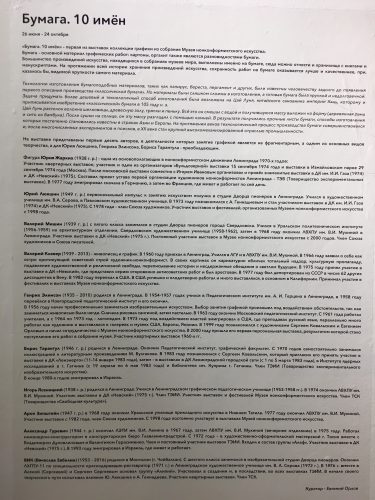 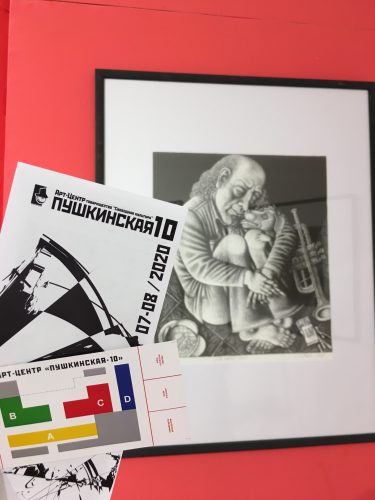 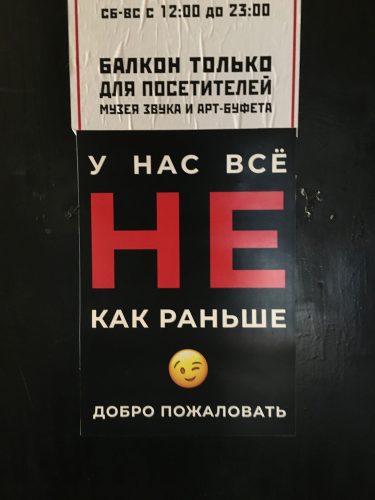 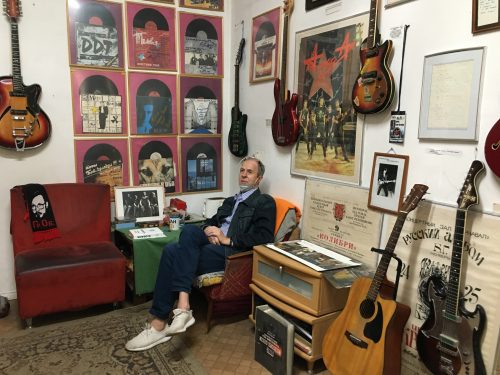 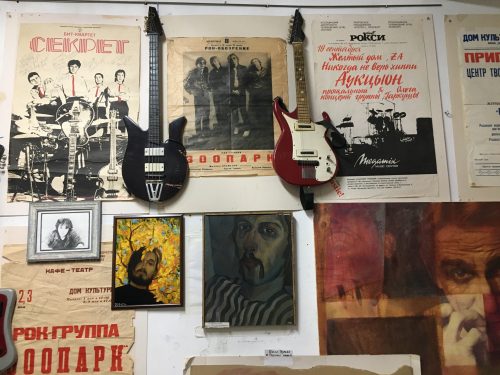 Of course, there are countless other galleries and historical centres in St. Petersburg, even very close to Liden & Denz, and I hope that this brief overview of these three galleries has inspired you to learn more about the city’s art scene.