Be Our Guest! – The Museums of Russian Writers 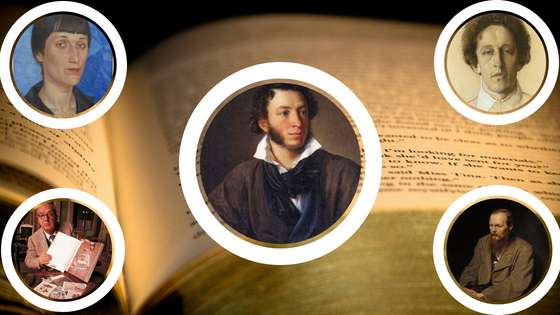 In St Petersburg, many of the former homes of famous writers of Russian literature have been preserved and are now open to visit. These small museums are often made up of at least two apartments. The first apartment usually houses the writer’s biographical details and the development of the writer’s literature and prose. Here, display cabinets hold original sketches, notes and drafts written by the writers themselves. In the second apartment, you see the actual apartment where the writers lived, fully restored to their original furnishings. After viewing the first apartment, the literature and biographies of the writers often comes under a new perspective in the second apartment. You get a feel for the person themselves; their tastes, their whims, their personalities.

As a language student, it would be an unforgivable sin to overlook the literature that has helped shape not only the language itself, but also the culture. Literature is held in high regard in Russia, and many school children learn the great verses of Pushkin among others at a very young age. Russians are fond of coming away with quotes in conversation when the occasion is apt, so literature isn’t necessarily confined to books. To understand the language and culture, having an idea about the literature might be a good idea. And to understand the literature, it might help to get inside the head of the writers themselves… queue museum time!!

Here are just a few of the many writers who called St Petersburg home:

The Memorial Museum and Apartment of ‘the Father of Russian Literature’ is literally a stone’s throw away from Palace Square, at Number 12 on the Moika Embankment. Pushkin lived the last two years of his life there; his untimely death in a dramatic duel brought a wave of national grief, and so his apartment was preserved. Indeed, it serves as a prime example of a typical residence that higher classes enjoyed during the 1830s.

Located a two-minute walk away from Vladimirskaya Metro Station (5, Kuznechny Pereulok) is Dostoyevsky’s Memorial Flat. Unlike Pushkin’s, this museum only opened in 1971, owing to the complex relationship the Soviet authorities held towards some of Dostoyevsky’s writings. The museum is small, but the modern, sparse and dimly lit biographical section of the museum brings the visitor’s attention on the works of the writer themselves.

Arguably one of the most important writers of the Silver Age, Blok was a master of Russian Symbolism. Blok experimented with rhythmic patterns, mysticism, drew inspiration from often banal situations or trivial events, and contrasted nature with the brutality of Russia’s unrelenting drive towards industrialisation. At the museum, located at 57 Ulitsa Dekabristov, you see his drafts and sketches; his creative development and ultimately his disillusionment with the turn of the Revolution.

Like Blok, Anna Akhmatova was held in high regard in educated Russian circles for her experimentation with poetic devices. Much like Blok, her early works dabbled with themes central to Russian Symbolist poetry. Outside Russia, however, she is more well-known with her cyclical poem Requiem, which daringly dealt with the horrors of the Stalinist Terror from her own perspective. As such, the museum at 53, Liteiny Prospekt is in part a memorial not only to Akhmatova, but also to the many thousands of victims of this period, whose sufferings she encapsulated in Requiem. 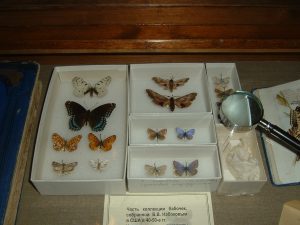 The writer Nabokov collected butterflies, which can be viewed at his memorial museum.

Most famous perhaps for his novel Lolita (1955), Nabokov was born to an aristocratic family at 47, Ulitsa Bolshaya Morskaya. Whilst the edifice of the building is certainly impressive, sadly not much remains of the inside of the house as Nabokov would have known, having been commandeered and converted into offices following the family’s escape from Russia in 1919. However, the few restored rooms offer a glimpse into Nabokov’s creative and intellectual genius. As well as a writer, Nabokov had a keen interest and passion for butterflies, and the museum houses his vast butterfly collection.

There are dozens more apartment museums of famous writers who lived in St Petersburg, this article merely scratches the surface. It is clear though that the literary influence is strong here. If you fancy finding out more St Petersburg’s literary heritage, check out this post!

A passionate Russian and history student, I'm here in bonny St P. to build on my knowledge of Russian and learn more about the shared history between Scotland and Russia.