Happy Birthday Pushkin! С днём рождения! St. Petersburg truly is Pushkin’s city, so to celebrate the great poet’s birthday why not experience the Northern Capital like he did? From the majestic Bronze Horseman to the scene of his final duel, take a look at the places which are now forever associated with Pushkin. 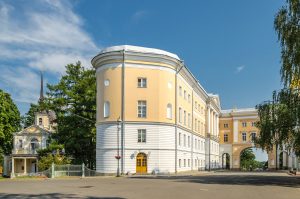 Pushkin attended the Imperial Lyceum during his formative years and it is here where he honed his literary talent. The school was dedicated to giving the best education to members of the gentry, who would later serve the Tsar. Situated in Tsarskoye Selo (Царское село, the Tsar’s Village), not far from St. Petersburg, the Lyceum sits next to the famed Catherine Palace (Большой Екатерининский дворец). The town was renamed Pushkin in 1937 to commemorate the centenary of the poet’s death. Founded in 1811 by Tsar Alexander II, Pushkin was amongst the very first of its graduates, and every year he wrote verses to celebrate the founding of the Lyceum. It was moved to St. Petersburg in 1844, but you can still visit the original building where Pushkin studied. The dormitories and classrooms have been carefully reconstructed to evoke the young poet’s time there. 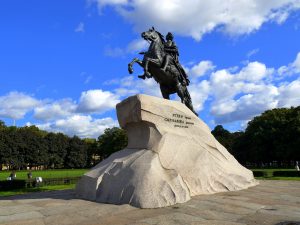 A milestone of Russian literature, Pushkin’s ‘The Bronze Horseman’ (1833) has been immortalised in this towering monument to the city’s founder, Peter I. Although the statue predates the poem by around 50 years, Pushkin describes the monument so evocatively that it has become synonymous with the epic work. Built during the reign of Catherine the Great, the statue features the Roman-esque Peter gallantly marching Russia to its future of reforms and Westernisation. It sits on top of the wonderfully-named ‘Thunder Stone’, the largest stone ever moved by man. In ‘The Bronze Horseman’, the poor Evgenii (a citizen driven half-crazy by the death of his beloved Parasha in a flood of the Neva), curses the statue and is then chased down the streets of St. Petersburg. 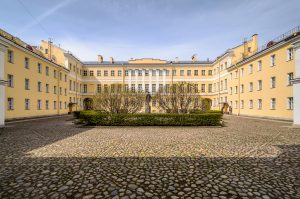 Pushkin’s former home stands on the banks of the river Moika, close to Palace Square and the Hermitage. The poet lived in the apartment from 1836 until his death in 1837, and it is here where he died from the gunshot wound. Originally built in the 1720s, the flat belonged to the Volkonsky family, friends of Pushkin. Despite the citywide outpouring of grief, the apartment wasn’t turned into a museum until 1925. In 1987, it underwent painstaking reconstruction to recreate the look of the original flat and include some of Pushkin’s personal possessions. Now, visitors can see the poet’s own library, armchair and desk, and even the waistcoat he wore during the fateful duel. A statue to the poet was erected outside the apartment to commemorate the time he spent there. 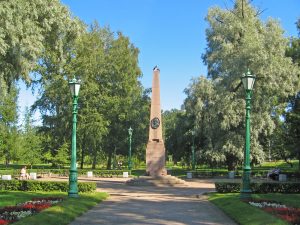 Pushkin’s death was as dramatic as his poetry. The poet was no stranger to duels (he had been challenged to many throughout his life), but this one would prove to be his last. Pushkin’s adversary was the French officer George d’Anthes – the poet’s own brother-in-law. D’Anthes had married Pushkin’s wife’s sister, Ekaterina Goncharova, to silence rumours that he’d had an affair with Pushkin’s wife, the society beauty Natalya Pushkina. The duel was fought on 27 January 1837 on the banks of the Black River. Then on the outskirts of the city, the area takes its name from the muddy river winding through the marshland. At less than 12 paces apart, Pushkin was shot in the stomach and died of his injury two days later. Today, the area is residential and a monument marks the place of the deadly duel, placed there 100 years after the poet’s death. 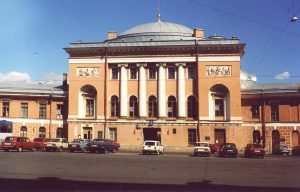 News of Pushkin’s death shook Russian society. Mourners gathered at the poet’s apartment to say their goodbyes and thousands also congregated at the Black River. Given Pushkin’s somewhat rebellious nature and his tenuous relationship with the authorities, who feared a mass revolt by the grieving citizens, the funeral was moved from the famous St. Isaac’s Cathedral (Исаакиевский собор) to the more inconspicuous Konyushennaya Church of the Saviour, also called Church of the Saviour Not Made by Human Hands (Церковь Спаса Нерукотворного Образа). It is also said that the funeral was relocated as the Orthodox Church refused to perform funeral rites for a man killed in a duel. No public announcement was made, and only court members were permitted entry. Pushkin’s body was then sent in secret to Svyatogorsky Monastry (Святогорский монастырь), to be buried beside his mother. 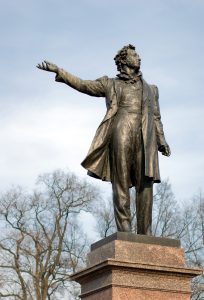 Unveiled in 1957, this four-metre high statue of Pushkin stands proudly in the Square of the Arts (Площадь исскуств), right in front of the Russian Museum (Русский музей). The statue is probably one of the most famous in St. Petersburg, and is a fitting tribute to the great poet. Created by sculptor Mikhail Anikushin, the monument was the first in the city to be designed and built by Russian craftsmen. Considered one of the finest statues dedicated to the poet, in 1958 Anikushin was awarded the Lenin Prize for his creation. With his arm outstretched in triumph, Pushkin looks out onto his beloved St. Petersburg, and in the words of the sculptor, “radiate[s] joy and sunshine”.

Hopefully this post has inspired you to take a tour of St. Petersburg and see it through the eyes of Russia’s most famous poet. Check out the Liden & Denz blog for more posts about the literary history and culture of the city!

This post was brought to you by Tilly Hicklin, currently studying Russian at Liden & Denz, St. Petersburg.