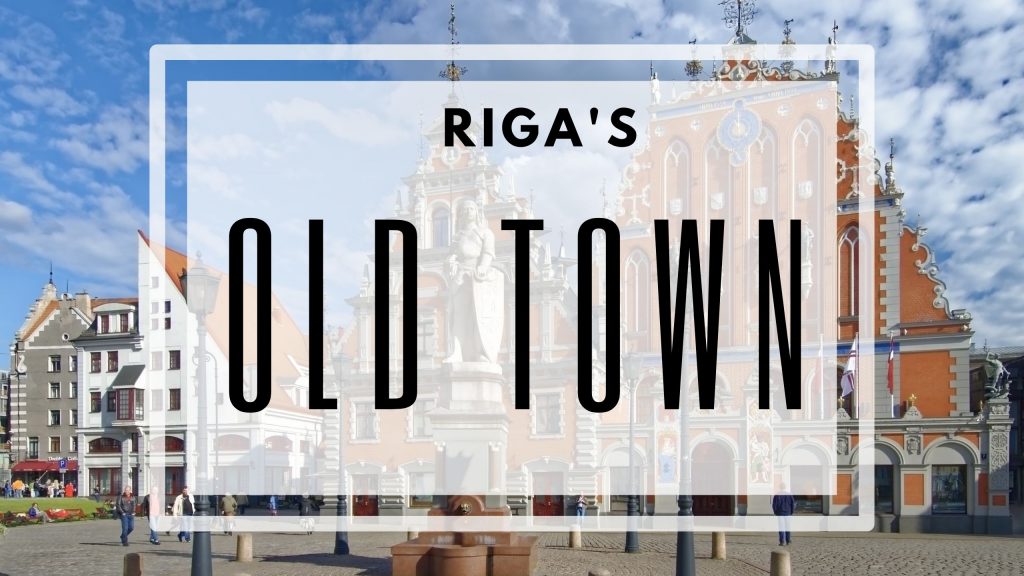 I think it is safe to say that no place can embody over 800 years of history as well as Riga’s Old Town. It tells the story of a city founded by German traders and missionaries which developed into a wealthy and influential centre for trade across the Baltic Sea, being occupied again and again by European superpowers of different centuries but managing to preserve its identity against all odds. Nowadays Riga stands as the capital of an independent Baltic nation, Latvia.
Today we have the opportunity of reliving this eventful past. It has created this unique place for us to explore: Riga’s Old Town. And that’s exactly what I did. I learned so much about the city, Latvian culture, history and much more simply by finding out about the historical sights contained within. So let my share with you some of my personal highlights and their stories by joining me on this little “tour” of the Old Town. Hopefully by the end you can understand why I find this place so fascinating.

Although not technically inside of the Old Town, I think the Freedom Monument is an excellent starting point. Financed solely by donations and unveiled in 1935 this impressive landmark stands 42,7 meters tall. It was dedicated to the soldiers who died during Latvia’s freedom battles against the Soviet Union from 1918 until 1920. On top of the obelisk you can see the bronze figure of liberty holding three stars. They symbolise the three historic provinces of Latvia. At its base sculptures are depicted which represent Latvian culture and history. On its front there is an inscription, “Tēvzemei un Brīvībai”, translating to “For Fatherland and Freedom”. Due to its nationalistic symbolism it is quite surprising that it survived Soviet occupation, be it with changed symbolism. For example, the meaning of the three stars was changed to symbolise the three Soviet republics of Estonia, Latvia and Lithuania.
Now let’s make our way past the Laima Clock, a famous meeting point in the city, and into the narrow alleys of Riga’s Old Town. 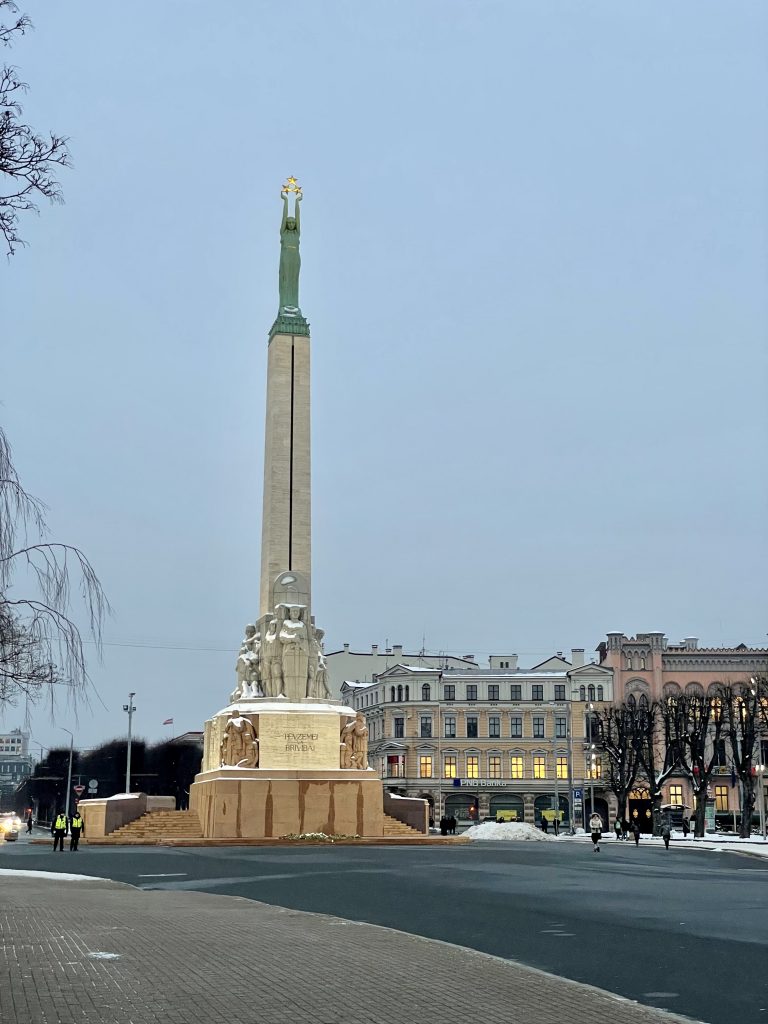 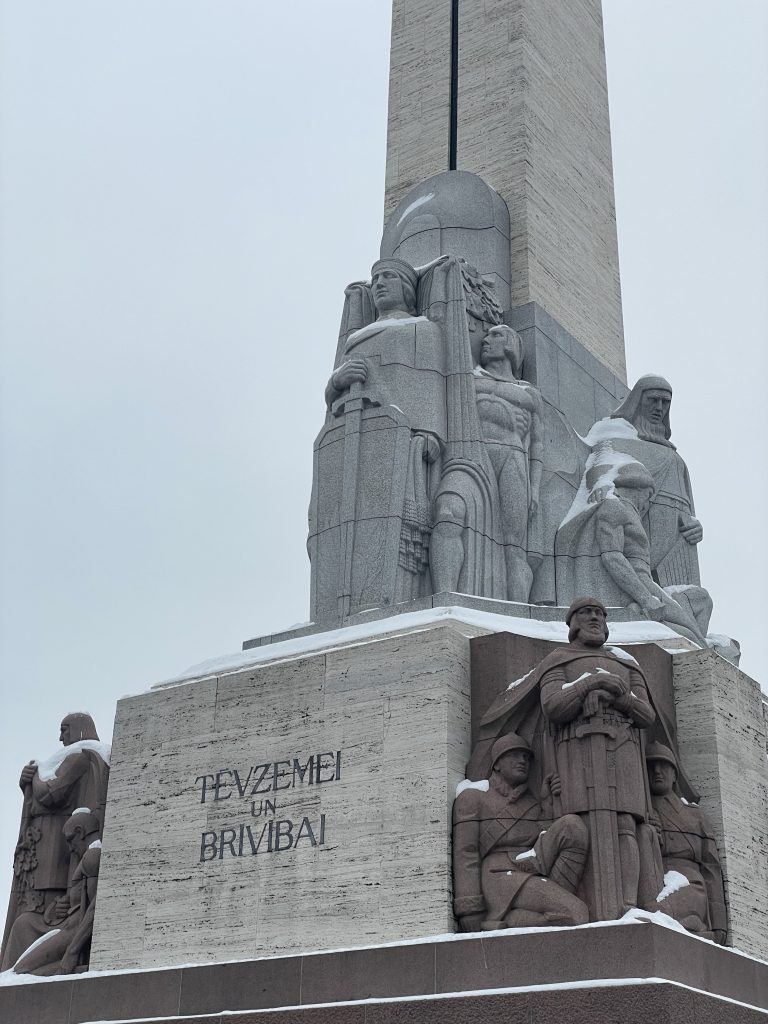 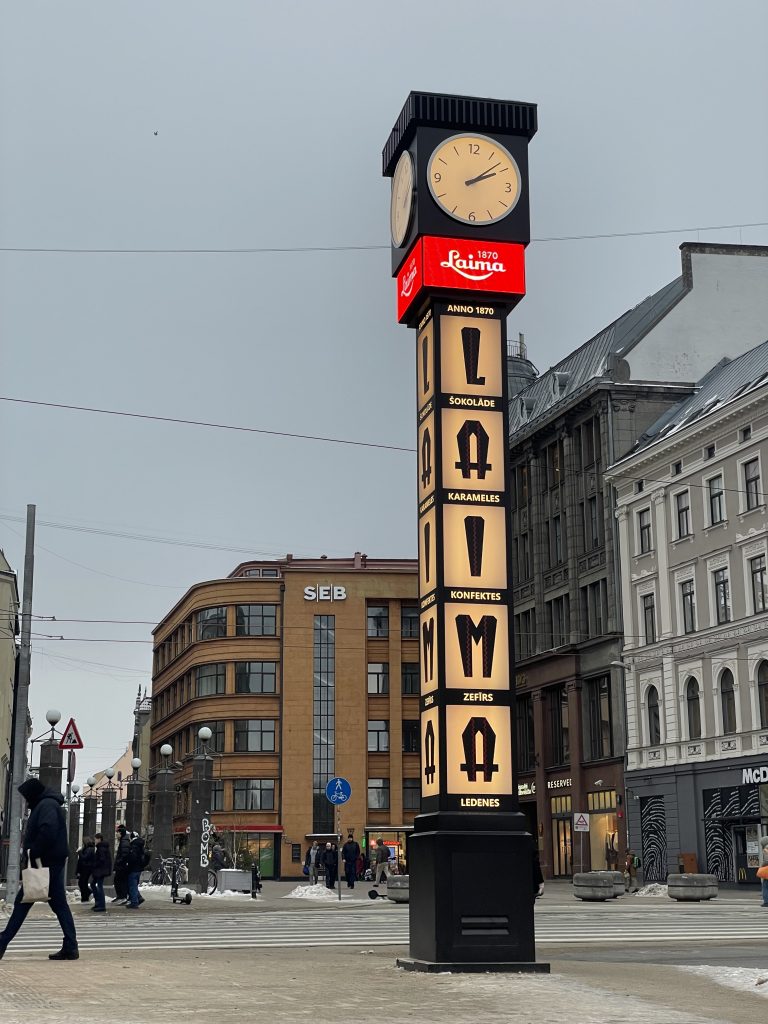 Next up is St. Peter’s Church. It was founded in 1209 and had quite a turbulent history. Most of the building that you can see here nowadays was constructed in the 15th century, however the bell tower has its own story of collapsing, burning down and being destroyed during World War II. The most recent version of the tower was retrofitted with an elevator, so you don’t even have to break a sweat getting up there. Although the view would be worth the climb.
Walking around the basilica we come across a statue of the Bremen Town musicians. This was a present by Riga’s sister city Bremen in 1990. Like the four animals looking through the window in the fairytale of the Grimm brothers this sculpture symbolises the city of Riga looking through the iron curtain of the cold war. 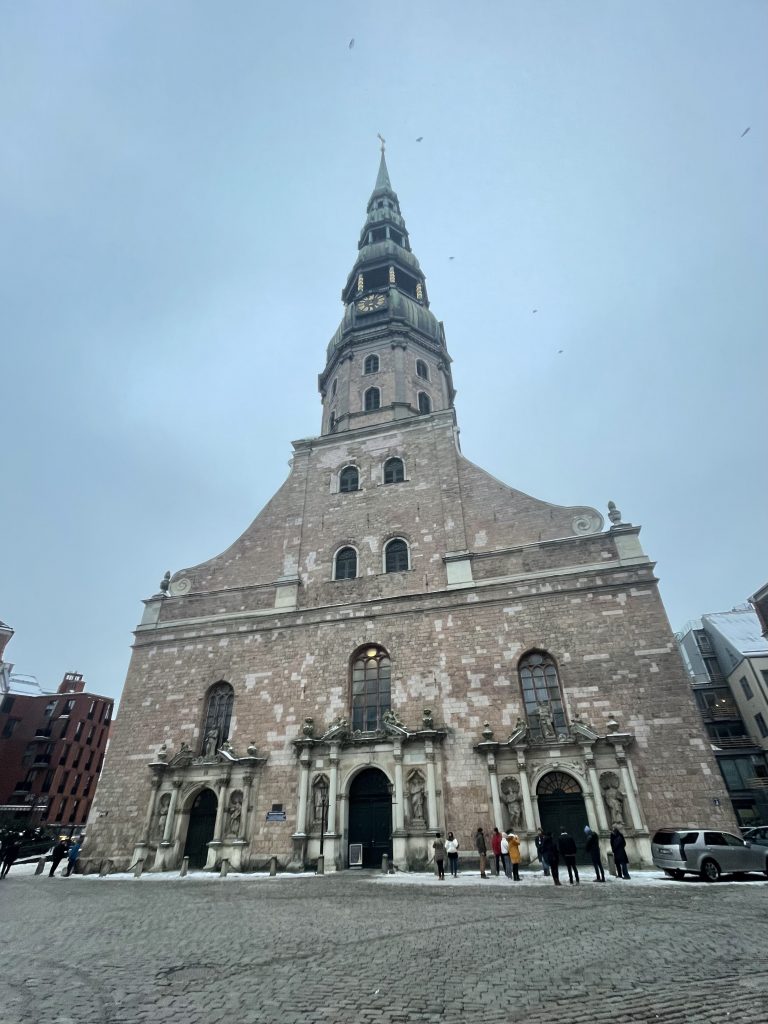 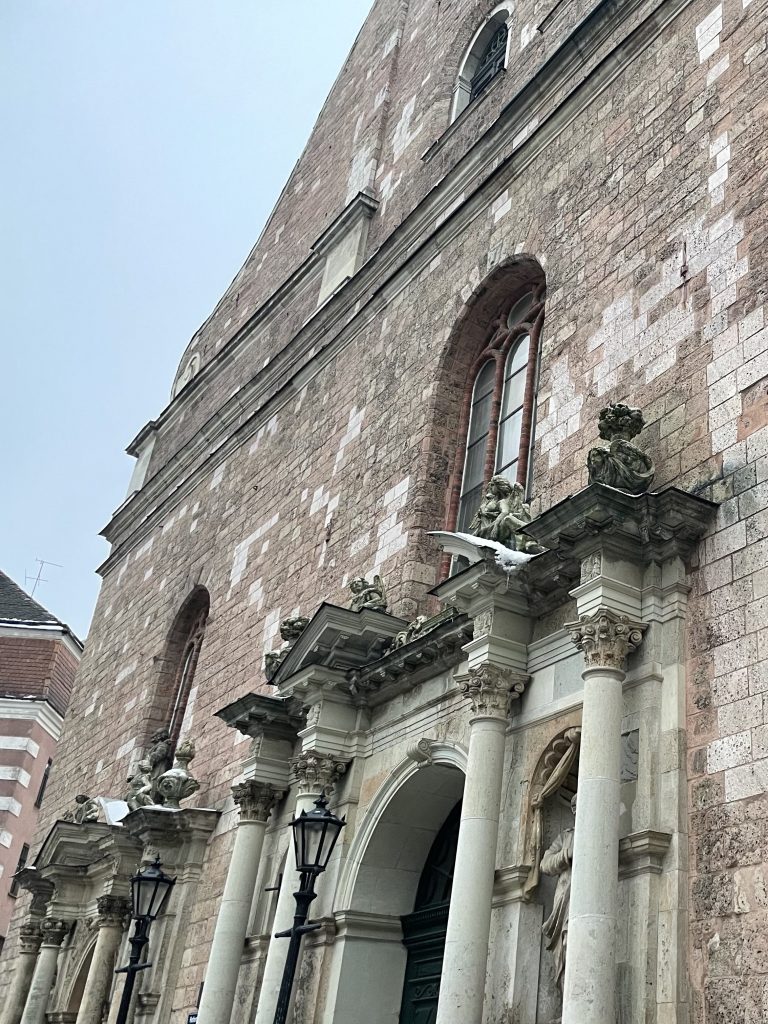 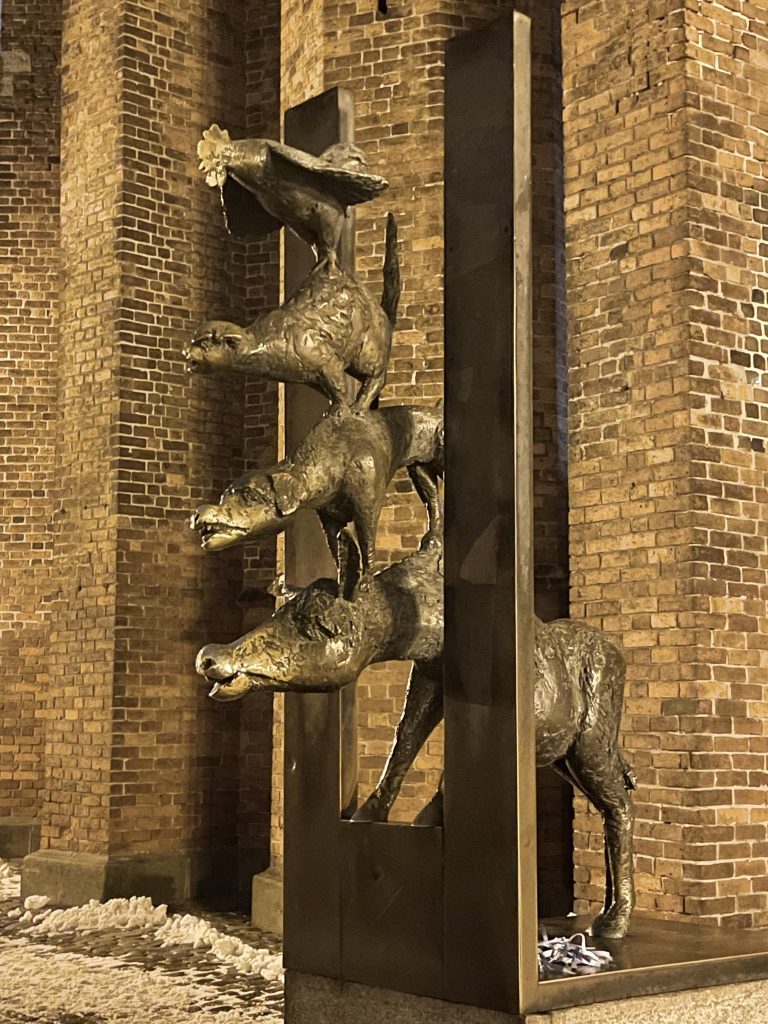 3. City Hall Square and House of the Blackheads:

Until the opening of the Central Market southeast of Riga’s old town the City Hall Square used to be the main market square. It is here where you can marvel at the House of the Blackheads. It was built for the Brotherhood of the Blackheads, a organisation consisting of unmarried merchants, but destroyed by a bomb during the Second World War. You can still admire it because it was completely rebuilt and opened for the city’s 800th anniversary in 2001. Left and right of the entrance you can see reliefs of Saint Mary and Saint Maurice. The latter one is probably connected to the name of the organisation due to his dark skin colour. However, exact details on the name “Blackhead” remain subject of speculation. Furthermore you can find the Museum of the Occupation of Latvia as well as the city hall here. 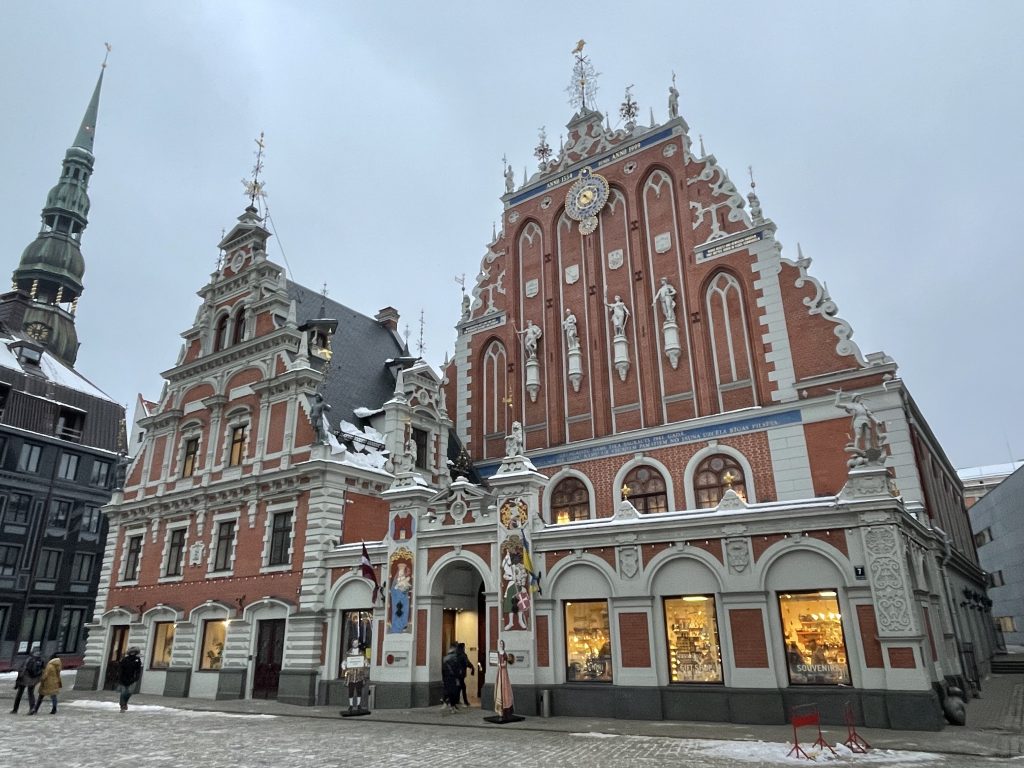 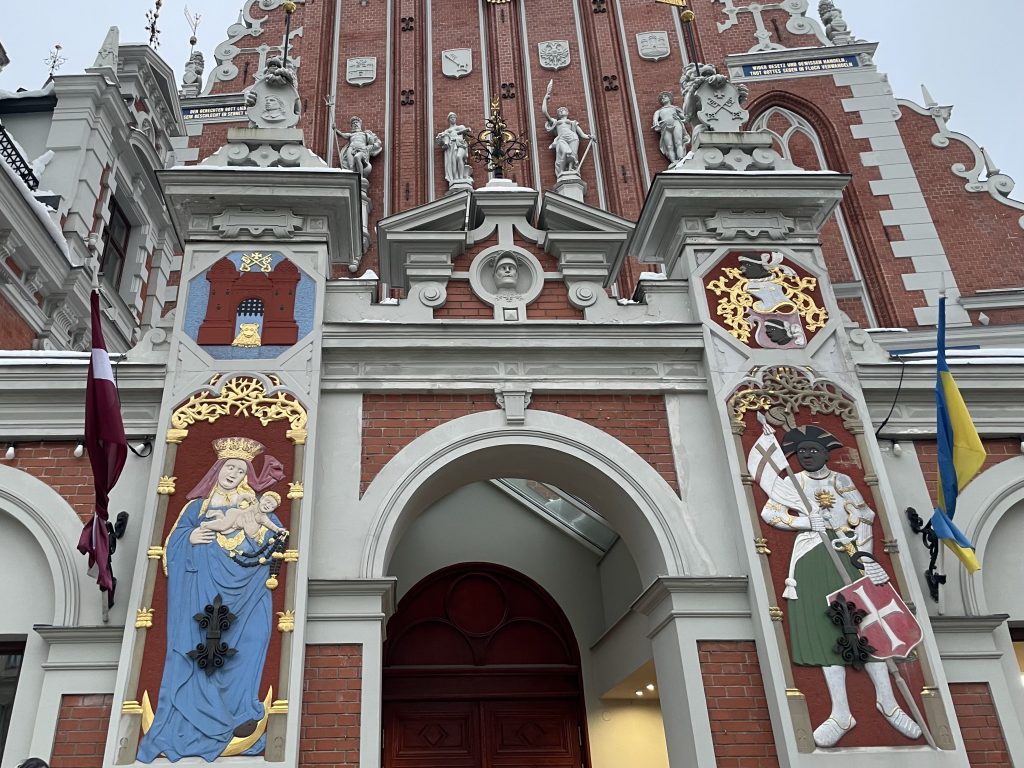 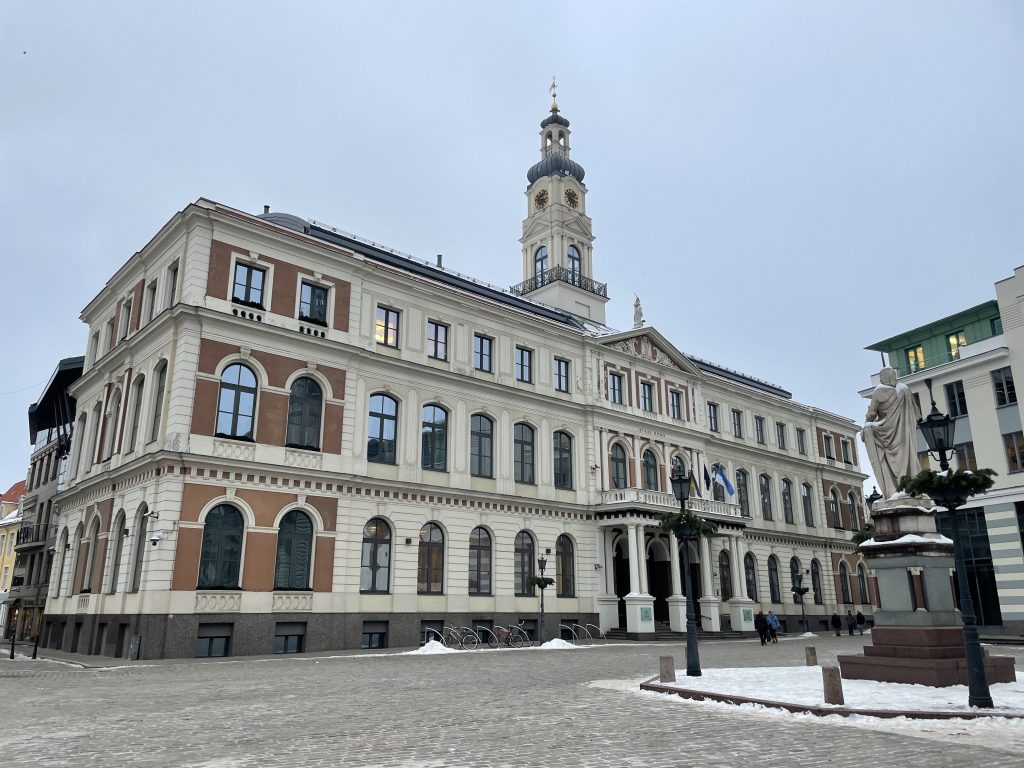 Making our way along Tirgoņu iela, the widest street in Riga’s old town, we reach the dome square. Today it is the largest square in Riga’s Old Town and is the location of many big events. However, it was not always there. There used to be a block of residential buildings. You can still see their outlines if you take a closer look at the square’s pavement. Taking a look around we can spot the building which is now housing Latvia’s national Radio, the former Riga Bourse and, of course, Riga Cathedral. It is the largest church in the Baltics and was founded shortly after St. Peter’s Church, in 1211. As usual for buildings of that age, it has seen many modifications and additions, but has remaining parts from its first version. According to controversial sources it was Bishop Albert, the alleged founder of Riga who laid its foundation stone. During Soviet times when religious services were prohibited it was used exclusively as a concert hall due to its impressive organ. Today almost every day there is a little concert at 12 o’clock where you can hear it in action. 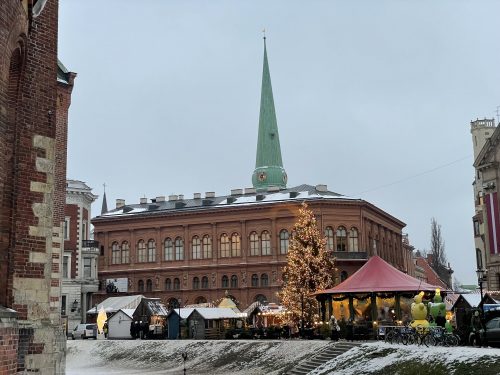 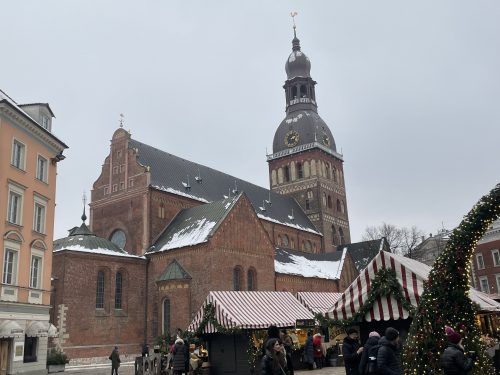 5. Art Museum in the Riga Bourse:

The building of the Riga bourse is located right on the dome square and stands out with its orange facade decorated with pillars and statues. Architectural elements from the venetian renaissance were used to symbolise the city’s growing wealth at the time. As its name and impressive architecture suggests it used to have an important economical role by housing Riga’s stock exchange committee. Today it is the location of Riga’s art museum. Let’s take a look inside the inner courtyard, where we can see the artwork Gondola by Dmitry Gutov hanging from the ceiling. The piece was created from an actual venetian gondola, in line with the building’s architectural style. The museum has changing exhibitions, this link will take you to what’s currently on. If you exit the building through its backdoor you are almost at the next sight on the list. 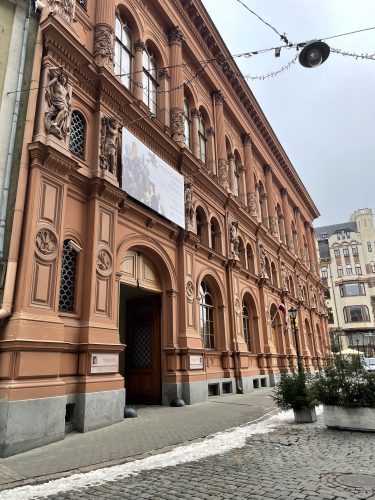 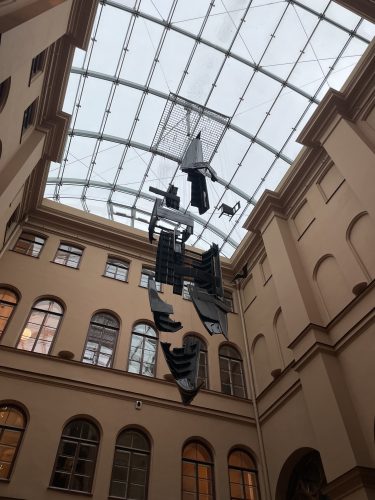 Not too much of Riga’s medieval architecture remains until this day, since the city modernised by tearing down old buildings and building new ones all throughout it’s history. However, the so called “Three Brothers”, three adjacent medieval buildings, stood the test of time and we can still visit them today. They are the oldest buildings in Riga that are still standing. Today you can finde the Latvian Museum of Architecture here. Entrance is free, and even though the exposition is not huge it is still worth checking out. One thing particularly interesting about the rightmost building, oldest of the Three Brothers, is the small size of its windows. Of course there is a story behind that. It was built around 1490 and back then there used to be a tax similar to the window tax in England. However, in Riga they didn’t tax the number of windows but rather their size. 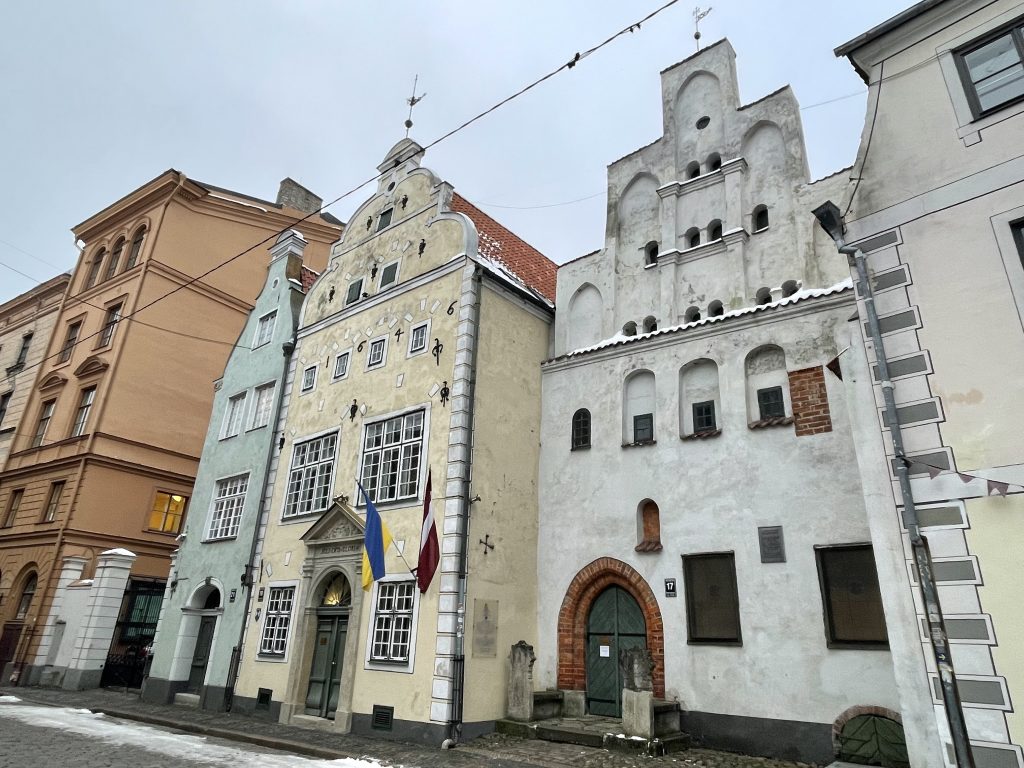 7. The Swedish Gate and Jacob’s Barracks:

We are now making our way out of the walled city through the so called “Swedish Gate”. It is one of eight gates in Riga’s city wall and is the only one remaining until today. It still gives us access to the Jacob’s Barracks just outside of the wall, the last stop on our tour. During the times of Swedish occupation from 1621 till 1711 Swedish soldiers were accommodated here which might also explain the gate’s name. However, the buildings you see here today were not erected until the 18th century, as the original ones were demolished and rebuilt under Tsar Peter I. Nowadays the barracks house plenty of pubs and restaurants, as well as diplomatic missions of many Latvian cities. You can find all their coats of arms at the east end of the building. 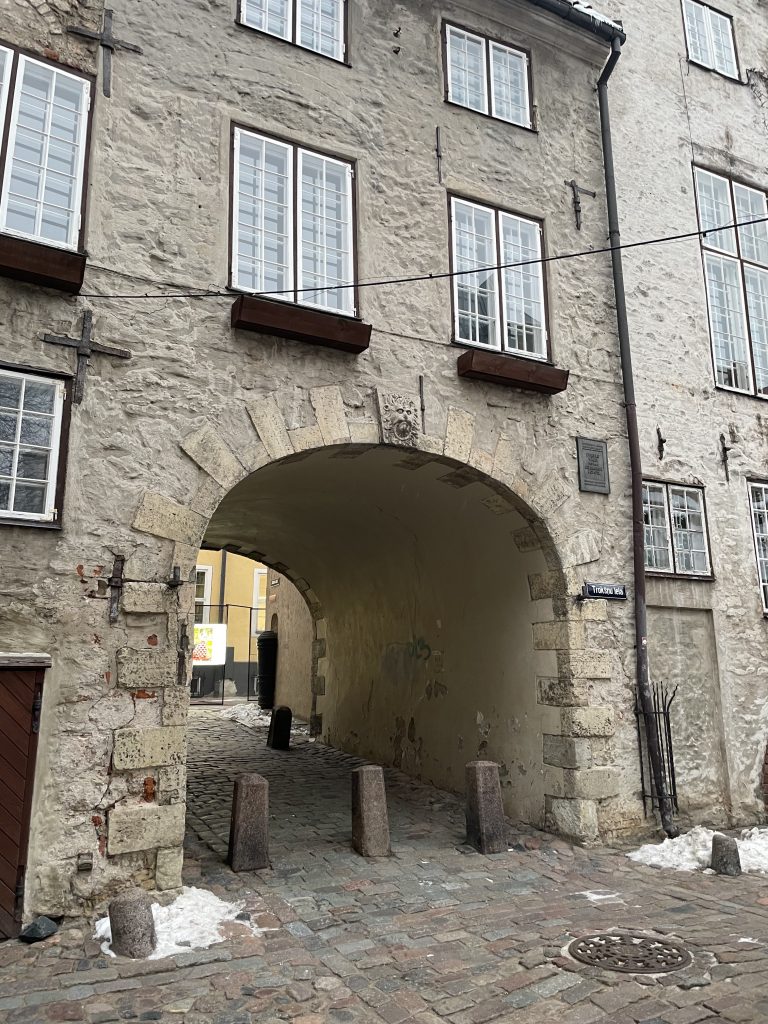 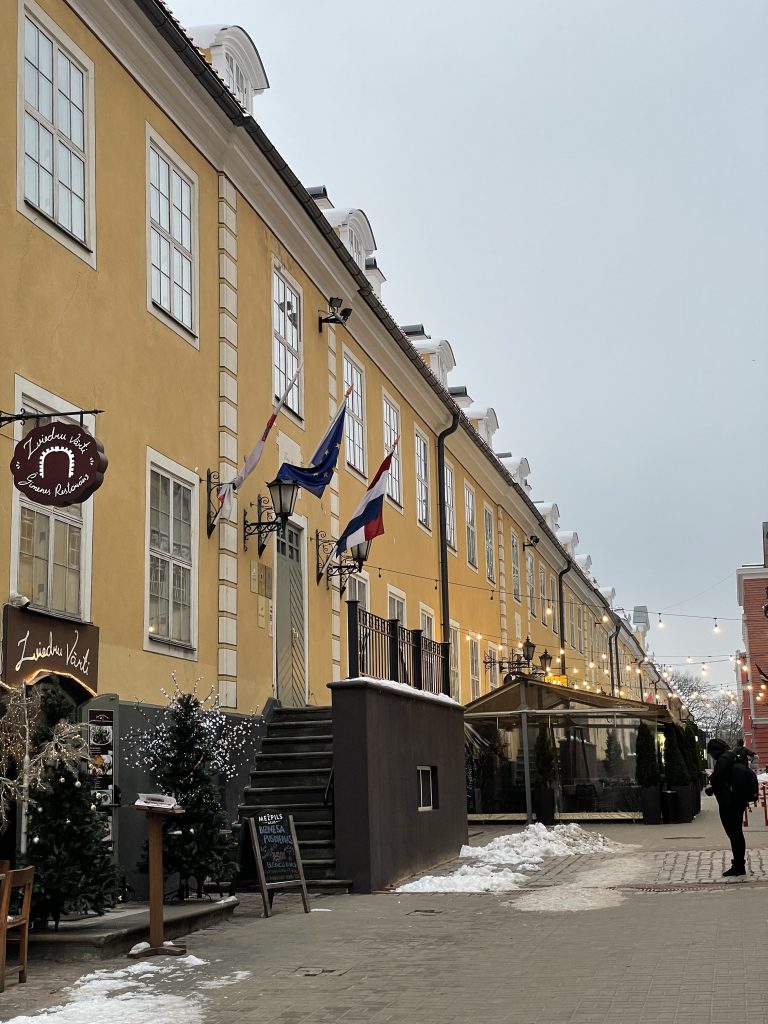 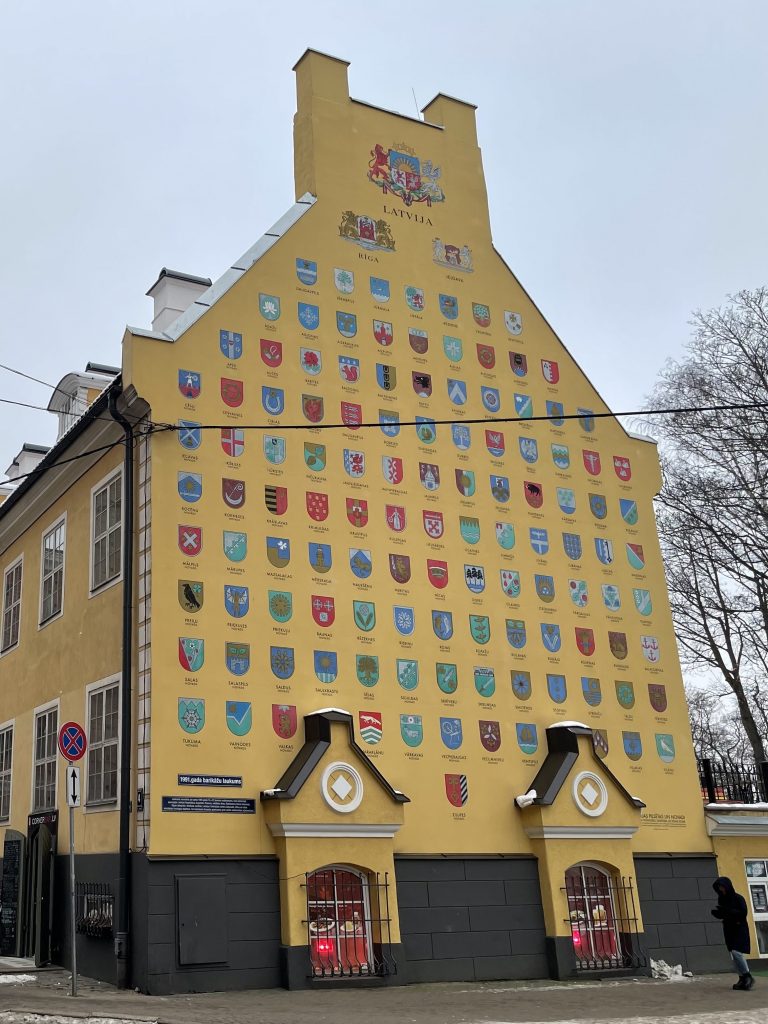 And this concludes our “tour” of Riga’s Old Town. Thank you for joining me on this little adventure. I hope this post could give you some examples on what this city has to offer and illustrate a bit of the history of this unique place. I certainly learned a lot while doing my research and I’m starting to make more and more sense of this place. It was a lot of fun writing this article and hopefully you enjoyed it as much as I did. Stay tuned for more.
Спасибо за чтение, thank you for reading.