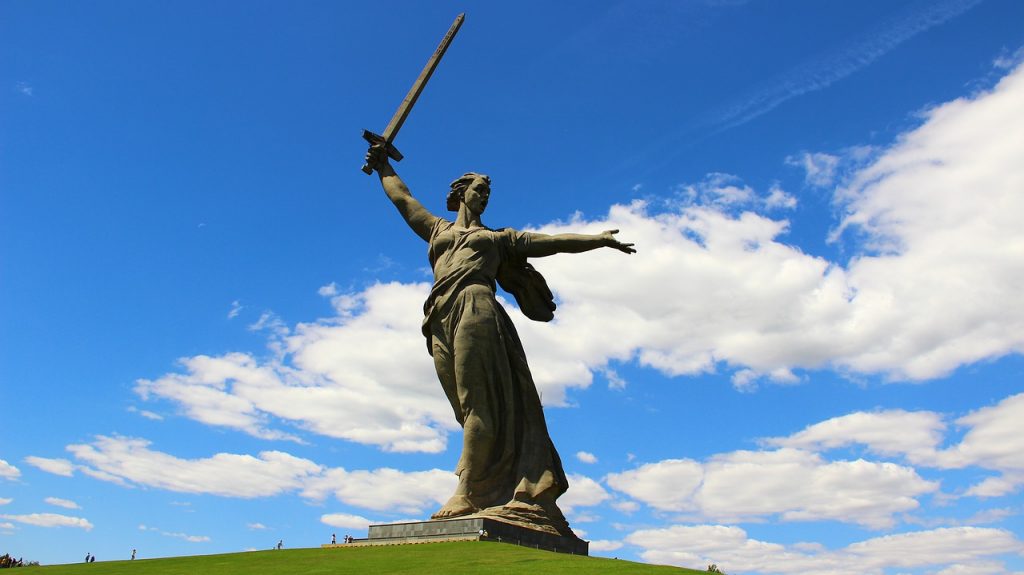 Situated on the Mamayev Kurgan–hill (Мамаев курган) in Volgograd (former Stalingrad) in Southern Russia, stands a magnificent statue which commemorates the sufferings, sacrifice, and heroism of the Soviet Union during the Second World War. This monument is the representation of a call to take up arms against the German National Socialist army, a call which later on echoed as a shout of victory against fascism.

As you probably know, Volgograd’s soil was scene to one of the most severe battles in history, which concluded in 1943 with more than 700’000 fatalities. Particularly this Soviet victory represented a turning point in WWII. Therefore, the monument “Rodina Mat’ Zovyot!” (Родина–мать зовёт!), which translates to The Motherland Calls, not only impresses with its physical greatness, but also by its ideological meaning, embodying a transcendent event in human history.

Built in 1967 by sculptor and artist Yevgeny Vuchetich and structural designer and construction engineer Nikolai Nikitin, it was the world’s tallest statue from 1967 – 1989, and today it takes the ninth position worldwide. With its 85 meters of height and nearly 8’000 tons of weight, it’s not only the highest female statue (without pedestal) in the world, but also the highest statue in Europe as well.

What many don’t know is that this monument is in sync with two others, which, all together, constitute a triad telling the very same story in different stages:

– Located in the city of Magnitogorsk lies the first monument of this triad. It’s the “Tyl Frontu Memorial” (Памятник «Тыл — фронту»), which translates to the Rear-front Memorial. This city played an important role in the manufacture of weapons for the Soviet army during WWII.

– The second statue is the “Motherland” itself raising that same sword found in Magnitogorsk, but in Volgograd, where, as we saw earlier, the Soviet Army managed to stop the Wehrmacht’s advance and began its march towards Berlin.

– The third and last monument is the Warrior Liberator (Воин-освободитель), located in the German capital. This monument shows a Soviet combatant with the sword in one hand and a young girl in the other, symbolizing the end of war and, simultaneously, the salvation of future generations.

These three monuments, therefore, symbolize the sword that was forged in Magnitogorsk, later raised by the Motherland in today’s Volgograd and finally rested on the ground after the victory in Berlin.
Undoubtedly, humans are specialists when it comes to encapsulating immeasurable meaning in objects, and “Rodina Mat’ Zovyot!” is a definite evidence thereof.

If you want to know more about other legendary monuments in Russia, this article might be of special interest to you!